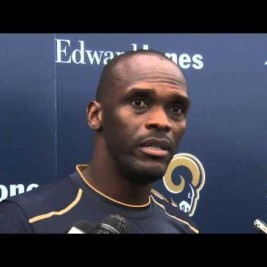 Businesses, Non-profit organizations, event planners and companies across the country have worked closely with our booking agents to hire Isaac Bruce for a speaking engagements, guest appearances, product endorsements and corporate events. Many of those same clients have continued to turn to our speakers bureau as we can easily align Isaac Bruce’s availability with their upcoming seminar, gala, annual conference, corporate function, and grand opening. Our close relationship with Isaac Bruce’s booking agent and management team further enables us to provide inquiring clients with Isaac Bruce’s speaking fee and appearance cost.

If your goal is to hire Isaac Bruce to be your next keynote speaker or to be the next brand ambassador our celebrity speakers bureau can assist. If Isaac Bruce’s booking fee is outside your companies budget or your unable to align with his appearance availability, our booking agents can provide you a list of talent that aligns with your event theme, budget and event date.

4 Time Pro Bowl receiver spending most of his career with the St. Louis Rams, Isaac Bruce was born on November 10, 1972 in Fort Lauderdale, Florida. He was originally drafted by the Los Angeles Rams in the second round of the 1994 NFL Draft. Bruce played college football at Memphis, where he finished his college football career with 113 receptions for 1,586 yards and fifteen touchdowns.

A three-time All-Pro and four-time Pro Bowl selection, Bruce has amassed over 14,000 receiving yards in his career (third all-time). He played the first 14 years with the Rams and won a Super Bowl ring with the team in Super Bowl XXXIV.

Bruce caught Kurt Warner's 73 yard touchdown pass late in the fourth quarter of Super Bowl XXXIV to give the Rams a 23-16 lead, which turned out to be the game winner.

Bruce and teammate Torry Holt became only the second WR duo from the same team to each gain over 1400 yards in the same season for the St Louis Rams, with Herman Moore and Brett Perriman bring the other. Bruce recorded one of his best seasons in recent years in 2006, eclipsing the 1,000 yard mark for the 10th time in his career.

On February 29, 2008, he signed a two-year, $6 million contract with the San Francisco 49ers. Jerry Rice gave Bruce permission to wear his No. 80, however Bruce and the team agreed against it. He eventually chose to wear No. 88.

On December 21, 2008, in a game at St. Louis against his former team, the Rams, Isaac Bruce caught his 1,000th career reception - a 3-yard touchdown catch, the St. Louis fans cheered on their former wide receiver, yelling "Bruuuuuuuuce" whenever he caught a pass, and cheered when he caught his 1,000th pass. After contemplating retirement in the offseason, he elected to return to the 49ers in 2009 for his sixteenth season, reasoning that he was there to "get in the playoffs again and win a Super Bowl".

On June 7, 2010 Bruce was traded from the 49ers to the Rams so that he would be able to retire as a Ram. Bruce was the last member of the former Los Angeles Rams to retire.