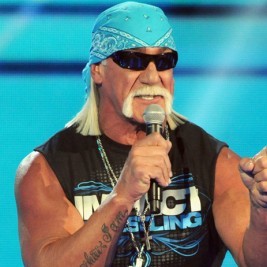 Businesses, Non-profit organizations, event planners and companies across the country have worked closely with our booking agents to hire Hulk Hogan for a speaking engagements, guest appearances, product endorsements and corporate events. Many of those same clients have continued to turn to our speakers bureau as we can easily align Hulk Hogan’s availability with their upcoming seminar, gala, annual conference, corporate function, and grand opening. Our close relationship with Hulk Hogan’s booking agent and management team further enables us to provide inquiring clients with Hulk Hogan’s speaking fee and appearance cost.

If your goal is to hire Hulk Hogan to be your next keynote speaker or to be the next brand ambassador our celebrity speakers bureau can assist. If Hulk Hogan’s booking fee is outside your companies budget or your unable to align with his appearance availability, our booking agents can provide you a list of talent that aligns with your event theme, budget and event date.

While not the most skillful wrestler of his era, nor even the biggest, Hulk Hogan combined his enormous 6' 5" 275+ pound physical stature with an outstanding screen presence to cause the World Wrestling Federation to rocket past all other wrestling organizations as the top provider of Wrestling Entertainment on a nationwide basis.

Hogan was brought into the sport of Professional Wrestling when he was discovered while playing the bass guitar in nightclub in the early 1970's. In order to learn his new trade, Hogan trained under the tutelage of Japan's great Hiro Matsuda, after which he moved from his home in Tampa to the west coast, where he began bodybuilding in Venice Beach, California, working under the name of "Sterling Golden." Later, he changed his Ring name to Terry Boulder, before settling on the name of Hulk Hogan. He was later managed by "Classy" Freddie Blassie and wrestled as a heel in a number of organizations, including the AWA and the WWF. While he gained in popularity in several regions, Hogan had not yet gained national exposure - this would happen in 1982.

In 1982, Hogan appeared in the motion picture Rocky III, starring as the enormous wrestling villain "Thunderlips". Because of the huge positive response his appearance received, Vince McMahon lured him back to the WWF and made him the focal point of that federation's ability to survive and then thrive. He defeated the Iron Sheik in 1984 to secure the WWF Heavyweight Championship and quickly became the WWF's most popular athlete. Behind Hogan's 24" arms and huge shoulders, McMahon pushed the WWF towards a national audience. Commencing with several tie ins with MTV, Hogan, the WWF and the sport of Pro Wrestling hit the big time when the Hulk appeared with actor Mr. T at the WWF's first big wrestling extravaganza, WrestleMania I.

WrestleMania I was not the first nationally broadcast live wrestling event, but at that time it was certainly the most important. Unbeknown to most fans, had Wrestlemania not been a big success, the WWF may have had to return to the days of operating as regional operation - or worse, it may have closed down completely. With all of the organizations hopes riding on the event, it is not surprising that Hulk Hogan was called upon to carry the burden of turning it into a colossal success. After countless appearances on popular television shows (including Saturday Night Live) in which he promoted the event, Hogan finally appeared alongside Mr. T and repelled the team of "Rowdy" Roddy Piper, "Mr. Wonderful" Paul Orndorff and "Cowboy" Bob Orton. The success of this event saved the WWF, established the validity of a national promotion and catapulted Hogan into the realm of popularity known only to the biggest stars of entertainment and sports - but even this was not the most important event for Hulk Hogan. That event would be WrestleMania III.

Loaded with extraordinary matches, WrestleMania III set an indoor attendance record as more than 93,000 fans crowded the Pontiac Silverdome for the event. On that day, the Main Event, and the match which spawned the huge attention to the arena was the battle between Hulk Hogan and the previously unbeaten Andre the Giant. After suffering an injury early on, Hogan astounded viewers around the world as he not only defeated Andre, but lifted the 520 pound Frenchman off of the ground and slammed him to the ring canvas to retain his title.

Hogan went on to defend his title in the WWF and later moved to WCW where he quickly gained that organization's Championship title.

After many years of being a fan favorite, in 1996, Hogan turned heel and joined Scott Hall and Kevin Nash to form the New World Order (nWo), a group who planned on taking over WCW. With this, Hogan took the name of Hollywood Hogan. The nWo managed to bring in huge numbers of defecters from WCW but later on after a disagreement split into nWo Black and White and nWo Wolfpac, which took red and white colours. Hogan took the leadership of Black and White until it later merges. Hogan later left the group to return to his red and yellow persona at 1999, until WCW was bought by the WWF at 2001.

In the year 2002, almost a year after the WWF had bought WCW, Vince McMahon brought back the original nWo to take over the WWF which meant as well as the return of Nash, Hall and Hogan to the WWF, the return of Hogan's Hollywood persona. Just a day after Hogan's return to the WWF, he came into a feud with The Rock, who some people might say had taken over Hogan as the WWF's main icon, which went into a match at WrestleMania X-8. Even though Rock defeated Hogan at WrestleMania, Hogan gained his friendship with Rock and was kicked out of the nWo by Nash and Hall and replaced Hogan with X-Pac.

Over the years, and in the future, Hulk Hogan has symbolized the growth of professional wrestling into a multi-million dollar industry - but to thousands of young fans, he has become their hero and their champion.