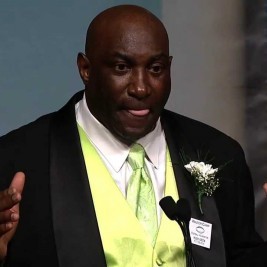 Businesses, Non-profit organizations, event planners and companies across the country have worked closely with our booking agents to hire Hugh Green for a speaking engagements, guest appearances, product endorsements and corporate events. Many of those same clients have continued to turn to our speakers bureau as we can easily align Hugh Green’s availability with their upcoming seminar, gala, annual conference, corporate function, and grand opening. Our close relationship with Hugh Green’s booking agent and management team further enables us to provide inquiring clients with Hugh Green’s speaking fee and appearance cost.

If your goal is to hire Hugh Green to be your next keynote speaker or to be the next brand ambassador our celebrity speakers bureau can assist. If Hugh Green’s booking fee is outside your companies budget or your unable to align with his appearance availability, our booking agents can provide you a list of talent that aligns with your event theme, budget and event date.

Hugh Green was born July 27, 1959 in Natchez, Mississippi and is a former linebacker in the National Football League. He played for eleven seasons from 1981 to 1991 for the Tampa Bay Buccaneers and the Miami Dolphins. He is considered to be one of the greatest linebackers in Buccaneers history.

In 1980, Green won the Walter Camp Award, the Maxwell Award, the Lombardi Award and was the Sporting News Player of the Year, the UPI Player of the Year and finished second in the Heisman Trophy balloting, losing to running back George Rogers of the University of South Carolina. Green's second-place sahowing in the voting for the Heisman is the highest rank a defensive specialist had ever attained, until Charles Woodson won the award in 1997.

Green was selected as the seventh overall pick of the first round by the Buccaneers in the 1981 NFL Draft. He was an 1982 All-Pro and 1983 All-Pro and was elected to the Pro Bowl twice in his career, in 1982 and 1983. Later in his career he suffered several injuries, including a car accident in the middle of the 1984 season for a fracture near the eye. He was traded to the Miami Dolphins in the middle of the 1985 season. In the 1985 season he was on to a career high in sacks and ended the season getting 7.5 while playing all 16 games despite the mid-season trade. In Miami Green played six more solid seasons before retiring. He was a member of Don Shula's teams which were often playoff contenders and Green was a starter on those teams, racking up 7.5 sacks in 1989, to tie a career high.