Search Houston Nutt
Head coach of the Arkansas Razorbacks football team at the University of Arkansas. 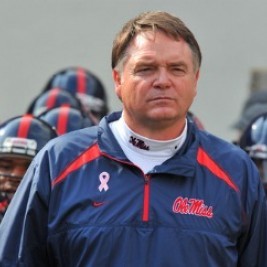 Businesses, Non-profit organizations, event planners and companies across the country have worked closely with our booking agents to hire Houston Nutt for a speaking engagements, guest appearances, product endorsements and corporate events. Many of those same clients have continued to turn to our speakers bureau as we can easily align Houston Nutt’s availability with their upcoming seminar, gala, annual conference, corporate function, and grand opening. Our close relationship with Houston Nutt’s booking agent and management team further enables us to provide inquiring clients with Houston Nutt’s speaking fee and appearance cost.

If your goal is to hire Houston Nutt to be your next keynote speaker or to be the next brand ambassador our celebrity speakers bureau can assist. If Houston Nutt’s booking fee is outside your companies budget or your unable to align with his appearance availability, our booking agents can provide you a list of talent that aligns with your event theme, budget and event date.

Houston Dale Nutt was born on 14 October 1957 at Little Rock, Arkansas. He is the son of Houston Dale Nutt, Sr. and Emogene Nutt and is the oldest of four children. His parents taught at the Arkansas School for the Deaf at Little Rock, Arkansas for 35 years. His father also served as athletic director and head basketball coach for the school. His father was inducted into the Arkansas Sports Hall of Fame in 2001.

Nutt was the last player recruited by legendary Arkansas head coach Frank Broyles before his retirement in 1976. Nutt was recruited as a drop-back style quarterback and started four games as a true freshman after starting quarterback Ron Calcagni was sidelined with an injury. Nutt also played that year for the Southwest Conference champion Arkansas basketball team under coach Eddie Sutton which went 26-2 and bulled its way to a 16-0 conference mark.

With the retirement of Frank Broyles, Arkansas hired Lou Holtz as the head football coach. Holtz established an option offense which did not make use of Nutt's passing style and relegated him to the bench as a backup.

Disappointed by his lack of playing time, Nutt transferred to Oklahoma State University and played two years as the starting quarterback. During his time at Oklahoma State he also played for the basketball team. Nutt graduated from Oklahoma State in 1981 with a degree in physical education.

Nutt spent six seasons as an assistant coach for receivers and quarterbacks at Oklahoma State and was promoted to offensive coordinator in 1989. During his years at Oklahoma State he coached legendary running backs Barry Sanders and Thurman Thomas.

In 1990 Nutt returned to the University of Arkansas as an assistant under head coach Jack Crowe and established a reputation as an excellent recruiter. Nutt remained with the Razorbacks for three seasons and established relationships with Arkansas high school football coaches that would serve him in good stead in later years.

In 1993 Nutt received his first head coaching position at NCAA Division I-AA Murray State University. He struggled during his first two seasons on the field with 4-7 and 5-6 records respectively but had success rebuilding the team personnel.

Nutt made the step up to NCAA Division I-A the next year when Boise State hired him to take over their program, which was the lowest ranked of 112 Division-IA schools and had posted a poor 2-10 record the year before. Boise State had just made the jump to Division I-A football and was looking for a recruiter and motivator to jump start their program.

Nutt became the head coach of the Razorbacks on 10 December 1997, succeeding head coach Danny Ford. The Razorback team had suffered through a long low period under a succession for head coaches in the previous years, having only received two bowl bids in the eight seasons prior to Nutt's arrival.

Nutt's predecessor, Danny Ford, had limited success on the field during his tenure, struggling through back-to-back 4-7 seasons in his last two years, however Ford did succeed in recruiting a solid squad which Nutt inherited for his first season.

Nutt's inherited Razorbacks were picked to finish last in the Southeastern Conference Western Division in 1998 but ended up with a 9-3 record and a share of the division title. The Razorbacks almost defeated the soon-to-be National Champion University of Tennessee on its home field during the season. For their efforts the Razorbacks received their first-ever invitation to the Citrus Bowl and ended the season ranked 16th after losing to the University of Michigan. Nutt was selected as the Football News' National Coach of the Year.

In 1999 Nutt's Razorbacks were picked to win the SEC Western Division but suffered a series of setbacks during the season but recovered to defeat nationally ranked Tennessee and Mississippi State University to earn a Cotton Bowl bid versus arch-rival Texas. The Razorbacks defeated Texas 27-6, becoming the first team to ever hold Texas to negative rushing yards in a game. The Cotton Bowl victory propelled them into the Top 20 rankings to end the season.

For the 2000 season the Razorbacks lost the core of his Danny Ford built team and suffered a string of injuries to his remaining starters including season-ending injuries to all of the starting running backs. The Razorbacks struggled through the season as a question mark until the final two games when he defeated ranked Mississippi State and LSU teams to pull out another winning record and another bowl appearance.

In the 2001 season the Razorbacks started off poorly with three straight losses in SEC play. They then came back to win six of the last seven including highly ranked South Carolina and Auburn teams. Based on this performance the Razorbacks were selected to return to the Cotton Bowl to face the defending National Champion Oklahoma Sooners. The Razorbacks lost to Oklahoma in a low-scoring affair.

In 2003 Nutt's team stampeded to a 4-0 record including an overpowering performance against #5 Texas on their home field. The early season success raised fans expectations sky-high and put Nutt under intense pressure when the Razorbacks lost their next three games putting them out of contention for the National Championship or even the SEC Western Division crown. The Razorbacks won 4 of their last 5 games and defeated Missouri in the Independence Bowl. After the 2003 season, Nebraska was widely seen as courting coach Nutt to be their head coach, after the firing of Frank Solich.

The 2004 and 2005 campaigns were widely expected to be rebuilding years, due to very young teams (a "young team" is one that relies heavily on underclassman, such as freshman and sophomores). The 2004 season ended with a 5 win - 6 loss record, and the team ended the year without a bowl invitation for the first time under Coach Nutt (since 1998, 6 straight bowls). After the 2004 season, it was highly rumored (LSU denies any flirtation) that LSU offered coach Nutt a head coaching job after Nick Saban left the Tigers for the NFL team the Miami Dolphins.

The 2005 season was also a rebuilding year as expected. Tough losses to the USC Trojans (score: 70-17) as well as to Vanderbilt and South Carolina showed that the season had been predicted accurately. The team was ineligible for a bowl for the second season in a row (and the second season overall under coach Nutt). This led to Arkansas Razorback fans calling for coaching changes. After meeting with Frank Broyles (athletic director) after the conclusion of the season, coaching changes were made by Nutt in the offseason, the most notable of which was the addition of Gus Malzahn (previously head coach at Springdale High School in Springdale, Arkansas) as offensive coordinator. Also notable in the offseason were the signing of several highly recruited in-state players, including Springdale High School quarterback Mitch Mustain and wide receiver Damian Williams.

Off the field, Nutt's players have been named to the SEC Academic Honor Roll 83 times and he has established a reputation as a responsible coach academically.