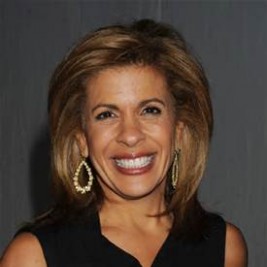 Businesses, Non-profit organizations, event planners and companies across the country have worked closely with our booking agents to hire Hoda Kotb for a speaking engagements, guest appearances, product endorsements and corporate events. Many of those same clients have continued to turn to our speakers bureau as we can easily align Hoda Kotb’s availability with their upcoming seminar, gala, annual conference, corporate function, and grand opening. Our close relationship with Hoda Kotb’s booking agent and management team further enables us to provide inquiring clients with Hoda Kotb’s speaking fee and appearance cost.

If your goal is to hire Hoda Kotb to be your next keynote speaker or to be the next brand ambassador our celebrity speakers bureau can assist. If Hoda Kotb’s booking fee is outside your companies budget or your unable to align with his appearance availability, our booking agents can provide you a list of talent that aligns with your event theme, budget and event date.

Hoda Kotb was born August 9, 1964 and is an American television news anchor and TV host known as the co-host of the fourth hour of Today with Kathie Lee Gifford. She won a Daytime Emmy in 2010 as part of The Today Show team.

Kotb was born in Norman, Oklahoma, but grew up in Morgantown, West Virginia. Her parents are from Egypt. Kotb and her family lived in Egypt for a year, as well as Nigeria. In Arabic, the name "Hoda" means "guidance", and is very popular among Arab women. The surname "Kotb" means "the pole", as in North or South Pole, and is a common surname among Egyptians. For a period during her career, she spelled her surname Kotbe to aid in pronunciation; she has since reverted to using the original form, Kotb.

In 1986, she graduated from Virginia Tech with a Bachelor of Arts in broadcast journalism. She is a member of the Delta Delta Delta sorority.

She was the keynote speaker at her alma mater for the 2008 Virginia Tech graduation, where she played Metallica's "Enter Sandman" over her iPod.

In 2010, she was elected to a three-year term to the Virginia Tech Alumni Association Board of Directors.

On January 15, 2013, she released her second book Ten Years Later: Six People Who Faced Adversity and Transformed Their Lives, in which she chronicles six stories by identifying a game-changing event in her subjects' lives and then revisiting those lives a decade later.