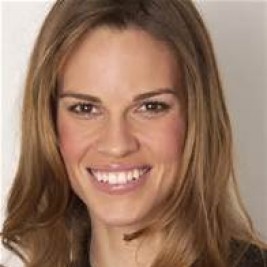 Businesses, Non-profit organizations, event planners and companies across the country have worked closely with our booking agents to hire Hilary Swank for a speaking engagements, guest appearances, product endorsements and corporate events. Many of those same clients have continued to turn to our speakers bureau as we can easily align Hilary Swank’s availability with their upcoming seminar, gala, annual conference, corporate function, and grand opening. Our close relationship with Hilary Swank’s booking agent and management team further enables us to provide inquiring clients with Hilary Swank’s speaking fee and appearance cost.

If your goal is to hire Hilary Swank to be your next keynote speaker or to be the next brand ambassador our celebrity speakers bureau can assist. If Hilary Swank’s booking fee is outside your companies budget or your unable to align with his appearance availability, our booking agents can provide you a list of talent that aligns with your event theme, budget and event date.

She is best known for her two Oscar-winning performances: a troubled transman, Brandon Teena, in the movie Boys Don't Cry, and a struggling waitress-turned-boxer, Maggie Fitzgerald, in Million Dollar Baby.

Her film career in Hollywood began with a small part in Buffy the Vampire Slayer (1992) and then a major part in The Next Karate Kid (1994), where she played "Julie Pierce", the first female protégé of the (by then) legendary sensei "Mr. Miyagi" played by Pat Morita.

Hilary Swank was born in Lincoln, Nebraska and makes no secret of her humble beginnings, particularly as a child growing up near Lake Samish in Bellingham, Washington. After winning her second Best Actress Oscar, she said: "I don't know what I did in this life to deserve this. I'm just a girl from a trailer park who had a dream." She has ADHD (Attention Deficit Hyperactivity Disorder), and takes Ritalin to treat it.

When she was nine years old, Swank made her first appearance on stage starring as Mowgli in The Jungle Book, and thereafter became heavily involved in her school and community theater programs. She went to school in Bellingham, where she lived with her family, until she was 16. She competed in the Junior Olympics and the Washington State championships in swimming; she ranked 5th in the state in all-around gymnastics (which would come in handy when starring in The Next Karate Kid (1994) years later). Swank's parents separated when she was 15, and her mother, supportive of her daughter's desire to act, moved the two of them to Los Angeles, California, where they lived out of their car until Swank's mother saved enough money to rent an apartment. She enrolled in South Pasadena High School, and started acting professionally. Swank also helped pay the rent with the money she earned appearing in television programs such as Evening Shade and Growing Pains.

In 1998, Swank was cast as single mother Carly Reynolds on Beverly Hills 90210. She was initially promised it would be a two-year role, but saw her character written out after 16 episodes. Swank later said that she was devastated at being cut from the show, thinking, "If I'm not good enough for 90210, I'm not good enough for anything." As it turned out, the firing was the best thing to happen to Swank, as it freed her to audition for the role of Brandon Teena in Boys Don't Cry. The role made her a star, with almost every critic hailing hers as the best female performance of 1999. The performance ultimately won her the Golden Globe and Oscar for Best Actress. Swank's Oscar success means that she has joined the ranks of Vivien Leigh, Helen Hayes, Sally Field, and Luise Rainer as the only actresses to have been nominated twice and win both times. She is also the third youngest double Best Actress Oscar winner.

Even after winning her first Oscar, she was reminded of her humble roots. She had earned only $75/day for her work on Boys Don't Cry, a total of $3000; her earnings were so low, that (according to an anecdote on 60 Minutes) she hadn't even earned enough to qualify for health insurance.

On February 28, 2006, it was announced Swank had signed a three-year contract "to be both the muse and the spokesperson for a new women's fragrance by Guerlain to be launched later this year."

Swank married actor Chad Lowe on September 28, 1997. They met at a 1992 Hollywood Athletic Club party and are both members at the AGAPE Spiritual Center in Culver City, California along with fellow stars, Dennis Quaid and Meg Ryan. Swank infamously forgot to thank Lowe during her acceptance speech after winning her first Oscar in 2000, and spent nearly every public appearance afterward making up for it. Upon winning her second Oscar in 2005, Lowe was the first person she thanked. However, in January 2006, the couple separated. In subsequent interviews, Swank expressed hope that they could reconcile, but they later announced in May 2006 that they were divorcing.

On January 15, 2005, after arriving at a New Zealand airport she was fined $230 by the Manukau District Court for not declaring an apple and orange she had on her person when she landed. Swank appealed the fine but it was upheld on March 30, 2005.