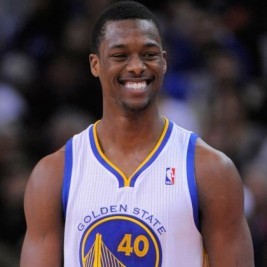 If your goal is to hire Harrison Barnes to be your next keynote speaker or to be the next brand ambassador our celebrity speakers bureau can assist. If Harrison Barnes’s booking fee is outside your companies budget or your unable to align with his appearance availability, our booking agents can provide you a list of talent that aligns with your event theme, budget and event date.

Harrison Barnes was born May 30, 1992 and is a college basketball player. He is a sophomore at North Carolina and was one of the top rated basketball players in the recruiting class of 2010. Barnes is sometimes known by the nickname "Black Falcon.

Barnes had 21 points in his North Carolina debut in an exhibition game in the Bahamas against the Commonwealth Bank Giants. UNC won the game 130-87. Overall, Barnes averaged 22 points and 6.5 rebounds per game for UNC in the Bahamas. On November 1, 2010, Barnes was named a preseason All-American by the AP. He is the first freshman to ever receive this honor. Barnes had 14 points and 4 rebounds in his North Carolina debut vs. Lipscomb. He recorded his first career double double on December 11, 2010, scoring 19 points and snatching 10 rebounds in a 96-91 victory over Long Beach State University.

Barnes' previous career high of 26 points came against Boston College on February 1, 2011. He surpassed this mark on March 12, 2011 in an ACC tournament game against Clemson, scoring 40 points while also grabbing 8 rebounds. Additionally, Barnes's 40 point performance set the record for points by a Freshman in an ACC Tournament game. On April 18, 2011, Barnes announced that he would return to North Carolina for his sophomore season.

Barnes is the ninth UNC Tar Heel to earn ACC Rookie of Year recognition, and the fourth to do so under Coach Roy Williams. During his freshman year at UNC, he became the 14th Tar Heel to earn Freshman All-American honors and also became the 11th freshman to earn first-team All-ACC Tournament honors. Barnes scored the most points, as a freshman, in the ACC tournament since Phil Ford scored 78 points in 1975. He then went on to the NCAA tournament where he scored 84 points, the most points of any UNC freshman in history.