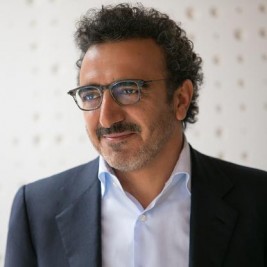 Businesses, Non-profit organizations, event planners and companies across the country have worked closely with our booking agents to hire Hamdi Ulukaya for a speaking engagements, guest appearances, product endorsements and corporate events. Many of those same clients have continued to turn to our speakers bureau as we can easily align Hamdi Ulukaya’s availability with their upcoming seminar, gala, annual conference, corporate function, and grand opening. Our close relationship with Hamdi Ulukaya’s booking agent and management team further enables us to provide inquiring clients with Hamdi Ulukaya’s speaking fee and appearance cost.

If your goal is to hire Hamdi Ulukaya to be your next keynote speaker or to be the next brand ambassador our celebrity speakers bureau can assist. If Hamdi Ulukaya’s booking fee is outside your companies budget or your unable to align with his appearance availability, our booking agents can provide you a list of talent that aligns with your event theme, budget and event date.

Hamdi Ulukaya is a Turkish businessman, entrepreneur, investor, and philanthropist of Kurdish background, based in the United States. Ulukaya is the owner, founder, Chairman, and CEO of Chobani, the #1-selling strained yogurt (Greek-style) brand in the United States. On April 26, 2016, Ulukaya announced to his employees that he would be giving them 10% of the shares in Chobani.

Originating from a dairy-farming family in a small village in Turkey, Ulukaya immigrated to the U.S. in 1994 to study English and took a few business courses as well. In an interview with CNN Money, Ulukaya explains that he was very serious about Kurdish rights and left Turkey due to the Turkish state's oppression of its Kurdish minority group. He started a modest feta-cheese factory in 2002 on the advice of his father.

His larger success came from taking a major risk: Ulukaya purchased a large, defunct yogurt factory in upstate New York in 2005, in a region that used to be the center of a dairy and cheese industry. With no prior experience in the yogurt business, he has created a yogurt empire, Chobani, with facilities in several states. It was valued at over $1 billion in annual sales in less than five years after launch, becoming the leading yogurt brand in the U.S. by 2011. The popularity of his Greek-style yogurt also sparked the rise in Greek yogurt's market share in the U.S. from less than 1% in 2007 to more than 50% in 2013. Ernst & Young named Ulukaya the World Entrepreneur of the Year in 2013. The success of his yogurt empire has made Ulukaya a billionaire and developed new employment in several regions. According to Forbes, his net worth as of 2016 is $1.92 billion.