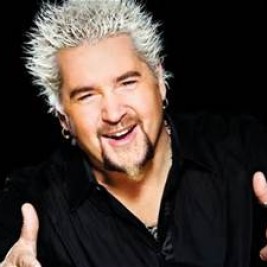 Businesses, Non-profit organizations, event planners and companies across the country have worked closely with our booking agents to hire Guy Fieri for a speaking engagements, guest appearances, product endorsements and corporate events. Many of those same clients have continued to turn to our speakers bureau as we can easily align Guy Fieri’s availability with their upcoming seminar, gala, annual conference, corporate function, and grand opening. Our close relationship with Guy Fieri’s booking agent and management team further enables us to provide inquiring clients with Guy Fieri’s speaking fee and appearance cost.

If your goal is to hire Guy Fieri to be your next keynote speaker or to be the next brand ambassador our celebrity speakers bureau can assist. If Guy Fieri’s booking fee is outside your companies budget or your unable to align with his appearance availability, our booking agents can provide you a list of talent that aligns with your event theme, budget and event date.

Guy Fieri (born Guy Ramsay Ferry; January 22, 1968) is an American restaurateur, author, game host, and television personality currently working for Food Network. He co-owns five restaurants in California[6] and is known for his television series on the Food Network. By mid-2010, the Food Network had made Fieri the "face of the network." In 2010, the New York Times reported that Fieri brought an "element of rowdy, mass-market culture to American food television," and that his "prime-time shows attract more male viewers than any others on the network."

Fieri began his association with food in grade school in Ferndale, California, by selling pretzels from his "Awesome Pretzel" cart and washing dishes to finance his trip to France to study cuisine. On his return to the United States, he worked at the restaurant at the Red Lion Inn in Eureka, California until going to Las Vegas for college. He later managed and owned restaurants. Fieri attended the University of Nevada, Las Vegas and graduated with a Bachelor of Science in Hotel Management in 1990. After graduation, he went to work for Stouffer's, developing restaurant concepts in Southern California and managing their flagship restaurant in Long Beach, California. After three years in southern California, he became district manager of Louise's Trattoria, managing six locations along with recruiting and training for the restaurants. A burger and chicken wings from Guy Fieri's Vegas Kitchen & Bar on the Las Vegas strip In the fall of 1996, Fieri and business partner Steve Gruber opened Johnny Garlic's, a California Pasta Grill in Santa Rosa, California. A second location opened in Windsor in 1999, a third in Petaluma in 2000 or 2001 (since closed), and a fourth in Roseville in late 2008. Subsequently they developed Tex Wasabi's (barbecue and sushi) in 2003 in Santa Rosa, adding a second location in Sacramento's Arden-Arcade area in 2007 (which was rebranded as Johnny Garlic's, and then subsequently closed). An additional Johnny Garlic's was opened in Dublin, California, in 2011. His first New York City restaurant, Guy's American Kitchen and Bar, opened to a scathing and much discussed New York Times review in 2012. In spring 2014, Guy Fieri's Vegas Kitchen and Bar opened in Las Vegas.