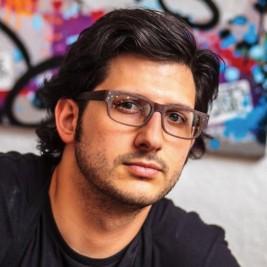 If your goal is to hire Giorgio Rapicavoli to be your next keynote speaker or to be the next brand ambassador our celebrity speakers bureau can assist. If Giorgio Rapicavoli’s booking fee is outside your companies budget or your unable to align with his appearance availability, our booking agents can provide you a list of talent that aligns with your event theme, budget and event date.

By the time Chef Giorgio Rapicavoli reached 28, he had already led at a handful of respected restaurants in his home town of Miami, Florida; rubbed elbows with worldfamous chefs; was lauded as the city’s first winner of Food Network’s Chopped; and owned, operated and killed it at the pop-up, Eating House, before making it a permanent fixture on the 305’s evolving culinary scene. Now, having launched a second successful restaurant, Taperia Raca, in the Magic City’s burgeoning MiMo district, and boasting a Chopped Champions win, Rapicavoli is hotter than ever. As early as a toddler, Rapicavoli seemed destined to be a chef, spending hours watching cooking shows in lieu of cartoons. Born and raised in Miami to an Italian mother and an Argentine father, Rapicavoli’s love of cooking ignited at age five when he and ma’ would spend Sundays in the kitchen making her beloved pomodoro sauce. After high school, Rapicavoli enrolled in the Culinary Arts program at Johnson and Wales University, where he upheld a nearly perfect GPA and a repeated standing on the Dean’s List. Alas, never one to be called conventional, Rapicavoli dropped the program a semester short of graduation to dive full-force into the industry. He took turn working under renowned chefs Robin Haas and Adam Votaw, was the executive chef at Chispa Doral at just 21 and then honed his craft during his three-year executive chef stint at 660 at The Angler’s on Miami Beach. The cuisinier has been a repeat guest at Slow Food’s Terra Madre in Italy alongside the likes of Ferran Adria, Alicia Waters and Joshua Viertel, an experience Rapicavoli attributes to changing his life, as well as his understanding of food. In 2011, he filmed an episode of the popular Food Network show Chopped, blowing away the judges and host. BUILDING BRANDS TO THEIR BOILING POINT Launched in February 2012, using his winnings from Chopped, Eating House pop-up instantly became a Miami favorite, creating a cult following of avid imbibers chomping at the bits to see what Rapicavoli would create next. Operating solely out of the kitchen of an existing breakfast and lunch diner, Rapicavoli had no storage and little time to prep before opening each night for dinner. He shopped daily, sourced from nearby farms, grew his own herbs and created each night’s menu based on what he found and what he was in the mood to cook. Creative, fun and funky twists on mostly comfort food were dished out to blissful guests for seven months before it closed, as planned, at the end of September 2012. In November of the same year, the Miami community rejoiced as Rapicavoli and business partner Alex Casanova announced they were purchasing the cafe from its owners and would open the permanent outpost of Eating House, now a Coral Gables institution. Rapicavoli’s energy, momentum and passion continue past the doors of Eating House. Most recently, he conceptualized and executed Tartare Bar, his successful four-day popup at the World Golf Championships-Cadillac Championship in Doral, Florida; repeatedly cooked at prestigious events such as Sundance Film Festival’s ChefDance, Foreign and Domestic Chef Ned Elliot’s Indie Chefs Week in Austin, Texas, and Identita Milano, Italy’s famous international cooking convention, where he was handpicked by iconic chef Lidia Bastianiach to compete alongside her, representing the US, in the Taglio Sartoriale Internazionale for the title of Grana Padano. Rapicavoli and his restaurant have been recognized by various national and local outlets, including Travel + Leisure; The New York Times; The Cooking Channel’s Unique Eats; Forbes Magazine’s 30 Under 30.