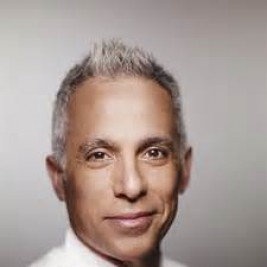 If your goal is to hire Geoffrey Zakarian to be your next keynote speaker or to be the next brand ambassador our celebrity speakers bureau can assist. If Geoffrey Zakarian’s booking fee is outside your companies budget or your unable to align with his appearance availability, our booking agents can provide you a list of talent that aligns with your event theme, budget and event date.

Geoffrey Zakarian was born July 25, 1959 and is an American restaurateur, television personality and author. He is the executive chef of several restaurants in New York City, Atlantic City and Miami. He is featured on several television programs on the Food Network, including Chopped and in 2011, The Next Iron Chef, where he won the right to join Iron Chef America. Zakarian began his culinary career at the Culinary Institute of America in Hyde Park, New York. As an apprentice chef, he began his work under chef Daniel Boulud at Le Cirque, where he was named "Chef de Cuisine" from 1982 to 1987. In 1990, he became the executive chef at 44, a restaurant described by The New York Times as "trendy" and "chic," located at the Royalton Hotel in midtown Manhattan. William Grimes, also of The New York Times, has also described Zakarian as "... the reason that 44 in the Royalton Hotel was always a lot better than it needed to be" in 2001. Previously in 1992, 44 had only received 2 stars from The New York Times columnist Bryan Miller. In 1995, he was hired to oversee Old Navy's ill fated coffee bar and coffee cart division with David Brody of Z100WHTZ He then went on to work for the Blue Door of the Delano Hotel in South Beach, Miami. In 1998, he became the executive chef at Patroon in Manhattan, which was awarded 3 stars (excellent) by NY Times critic Ruth Reichl. In the spring of 2000, Zakarian worked with Alain Passard, a renowned French chef at the three-Michelin star restaurant Arpège in Paris. His style is described as "modern" with roots in French cuisine, or as he describes, "dynamic American." Zakarian owned two restaurants, Town and Country, both of which are in Manhattan. They have been rated with 3 stars by The New York Times. His restaurant Town was located in the East Side of Midtown Manhattan in the Chambers Hotel and opened in Spring 2001 but had closed in 2009. Country is located in the Carlton Hotel near Madison Square Park and opened in 2005. Zakarian is now a consultant and executive chef at the Water Club in Atlantic City and the Lamb's Club in New York City, respectively. In the spring of 2006, Zakarian released his first book, Geoffrey Zakarian's Town / Country. It had been named as "...one of the best of 2006" by The New York Times columnist Amanda Hesser. The book features 150 recipes for family, friends and "Life Around the Table."