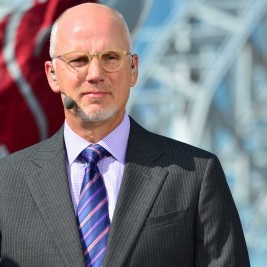 If your goal is to hire Gene Wojciechowski to be your next keynote speaker or to be the next brand ambassador our celebrity speakers bureau can assist. If Gene Wojciechowski’s booking fee is outside your companies budget or your unable to align with his appearance availability, our booking agents can provide you a list of talent that aligns with your event theme, budget and event date.

He is a sports columnist, best known for his work with ESPN.

He became a senior writer for ESPN The Magazine in January 1998, having worked as a football reporter for the network since 1992. He was named senior national sports columnist for ESPN in June 2005. He also has worked at the Los Angeles Times, Dallas Morning News, and Denver Post. Wojciechowski graduated from the University of Tennessee, and he began his career as a sports writer covering college football and college basketball.

He has authored or co-authored eight books, including Cubs Nation, About 80 Percent Luck, Pond Scum and Vultures, as well as autobiographies with several notable sports figures, including Bill Walton, Rick Majerus, Reggie Miller and Jerome Bettis.