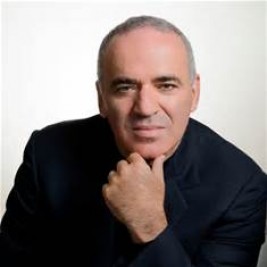 Businesses, Non-profit organizations, event planners and companies across the country have worked closely with our booking agents to hire Garry Kasparov for a speaking engagements, guest appearances, product endorsements and corporate events. Many of those same clients have continued to turn to our speakers bureau as we can easily align Garry Kasparov’s availability with their upcoming seminar, gala, annual conference, corporate function, and grand opening. Our close relationship with Garry Kasparov’s booking agent and management team further enables us to provide inquiring clients with Garry Kasparov’s speaking fee and appearance cost.

If your goal is to hire Garry Kasparov to be your next keynote speaker or to be the next brand ambassador our celebrity speakers bureau can assist. If Garry Kasparov’s booking fee is outside your companies budget or your unable to align with his appearance availability, our booking agents can provide you a list of talent that aligns with your event theme, budget and event date.

Garry Kimovich Kasparov, born Garik Kimovich Weinstein, is a Russian (formerly Soviet) chess Grandmaster, former World Chess Champion, writer, and political activist, considered by many to be the greatest chess player of all time. From 1986 until his retirement in 2005, Kasparov was ranked world No. 1 for 225 out of 228 months. His peak rating of 2851, achieved in 1999, was the highest recorded until being passed by Magnus Carlsen in 2013. Kasparov also holds records for consecutive professional tournament victories and Chess Oscars. Kasparov became the youngest ever undisputed World Chess Champion in 1985 at age 22 by defeating then-champion Anatoly Karpov. He held the official FIDE world title until 1993, when a dispute with FIDE led him to set up a rival organization, the Professional Chess Association. In 1997 he became the first world champion to lose a match to a computer under standard time controls, when he lost to the IBM supercomputer Deep Blue in a highly publicized match. He continued to hold the "Classical" World Chess Championship until his defeat by Vladimir Kramnik in 2000. Kasparov announced his retirement from professional chess in March 2005, after which he devoted his time to politics and writing. He formed the United Civil Front movement, and joined as a member of The Other Russia, a coalition opposing the administration and policies of Vladimir Putin. In 2008, he announced an intention to run as a candidate in the 2008 Russian presidential race, but failure to find a sufficiently large rental space to assemble the number of supporters that is legally required to endorse such a candidacy led him to withdraw. Kasparov blamed "official obstruction" for the lack of available space. Although he is widely regarded in the West as a symbol of opposition to Putin, support for him as a candidate was very low. The political climate in Russia reportedly makes it difficult for opposition candidates to organize. He is currently on the board of directors for the Human Rights Foundation and chairs its International Council.