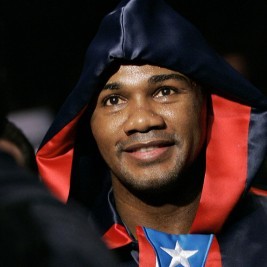 Businesses, Non-profit organizations, event planners and companies across the country have worked closely with our booking agents to hire Felix Trinidad for a speaking engagements, guest appearances, product endorsements and corporate events. Many of those same clients have continued to turn to our speakers bureau as we can easily align Felix Trinidad’s availability with their upcoming seminar, gala, annual conference, corporate function, and grand opening. Our close relationship with Felix Trinidad’s booking agent and management team further enables us to provide inquiring clients with Felix Trinidad’s speaking fee and appearance cost.

If your goal is to hire Felix Trinidad to be your next keynote speaker or to be the next brand ambassador our celebrity speakers bureau can assist. If Felix Trinidad’s booking fee is outside your companies budget or your unable to align with his appearance availability, our booking agents can provide you a list of talent that aligns with your event theme, budget and event date.

Felix Trinidad has an impressive record of 42 wins and 2 losses, with 35 wins by knockout, and is considered one of the best Puerto Rican boxers in history, along the likes of Wilfred Benitez, Ivan Calderon, and Hector Camacho.

When Trinidad Sr. announced his decision to turn his son into a professional boxer rather than wait for the 1992 Barcelona Olympics, he was met with skepticism and criticism from Puerto Rico's top boxing experts.

Trinidad Jr, however, proved them wrong quickly by burying opponent after opponent. Among Trinidad's victims was Jake Rodriguez, a fellow Puerto Rican and former Jr. Welterweight champion of the world, who was the only one to last 10 rounds with him during this period.

In 1993, Trinidad traveled to San Diego, California and defeated the crafty defending world Welterweight champion Maurice Blocker in 2 rounds, in a fight televised by Showtime. It was the beginning of a long-lasting friendship between the new champion and the cable network.

Defending this title, he beat former and future world champions Hector 'Macho' Camacho, Freddie Pendleton, and 'Yori Boy' Campas among others. He kept defending the title until he was able to sign for an unification bout with the other world Welterweight champ, Oscar De La Hoya. During all of that, Trinidad changed alliegances from Showtime to HBO.

The highly anticipated bout between the 2 Welterweight champions took place September 18, 1999 at the Mandalay Bay Hotel in Las Vegas. It was nicknamed Fight of the Millennium. De La Hoya dominated the early part of the fight, but decided to coast during the final rounds. Thinking he had the fight won, De La Hoya preferred to evade Trinidad rather than exchange punches with him. In a highly controversial decision, Trinidad won the fight by majority decision.

After leaving the Welterweight world championships vacant, Trinidad moved in weight to challenge World Jr Middleweight champion David Reid, a Las Vegas talent, again at the Mandalay Bay. Trinidad was knocked down in the 3rd, but proceeded to beat Reid, dropping him 5 times and winning a unanimous decision. Next, he unified the title vs the other world champion, power puncher Fernando Vargas of Oxnard, California. This bout saw Trinidad rise from the canvas in round 4 after a fast start that saw him knock down the Mexican warrior twice in round one, but he prevailed after dropping Vargas again 3 times in round 12, the last knockdown after which the fight was stopped. After Trinidad left the division, he came back and regained the world title.

Trinidad once again moved up in weight, lured by Don King's Middleweight unification tournament and he beat William Joppy by a knockout in 5 rounds to become world Middleweight champion. His unification bout with the other world champ, Bernard Hopkins of Philadelphia, originally scheduled for September 15, 2001 at the Madison Square Garden had to be postponed because of the September 11 Terrorist attacks. It was fought, however, two weeks later, on September 29, and Trinidad had to taste the sour taste of defeat this time, losing for the first time, to the physically more mature Hopkins, who then became the undisputed world champion in the division.

Trinidad's fans in Puerto Rico proved how much they really loved him by mounting another large welcoming at the airport after his defeat.

After beating former Middleweight world champ Hassine Cherifi of France by knockout in 4 rounds in San Juan, Trinidad shockingly announced his retirement, leaving the sport of boxing with a record of 41 wins, only 1 defeat, and 34 wins by knockout. He reconciled with his wife Sharon, after a scandal broke out where it was discovered he had a baby girl with a TV model that he had an affair with. He has committed to pay the child's support and help raise her along with his 2 other daughters with Sharon.

Trinidad announced a comeback on March 2, 2004. On October 2 of that same year, he recovered from a third round knockdown to drop the former world champion, Ricardo Mayorga, three times in the eighth, knocking Mayorga out. (See Trinidad versus Mayorga) On May 14, 2005. Trinidad challenged Winky Wright. The winner would become the WBC's number one Middleweight challenger, but Trinidad was outpointed over twelve rounds by Wright. After which, Trinidad finally retired. He is considered by many the best Puerto Rican boxer to this day. Trinidad currently holds a record of 42 wins and two losses, with 35 wins by knockout.