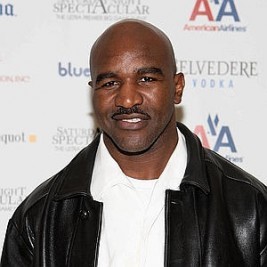 If your goal is to hire Evander Holyfield to be your next keynote speaker or to be the next brand ambassador our celebrity speakers bureau can assist. If Evander Holyfield’s booking fee is outside your companies budget or your unable to align with his appearance availability, our booking agents can provide you a list of talent that aligns with your event theme, budget and event date.

His nickname is The Real Deal. Though some might claim Evander Holyfield is a "four time world champion", this claim is spurious to most boxing historians, who claim that Holyfield only regained the lineal heavyweight championship of the world once when he beat Riddick Bowe in their 1993 rematch. Evander is also the younger brother of actor and dancer, Bernard Holyfield. Evander currently lives in Atlanta with his wife, and three children.

Holyfield debuted as a professional boxer with a nationally televised win in six rounds over Lionel Byarm at the Madison Square Garden, November 11, 1984. He immediately began stepping up in class, as he began 1985 with a win over Eric Winbush, a fighter who had beaten former world Light Heavyweight champion Matthew Saad Muhammad two years before. He had six more wins that year, including victories against Tyrone Booze and former world title challenger Anthony Davis.

He began 1986 with a knockout in three over former world Cruiserweight challenger Chisanda Mutti, and proceeded to beat Jessy Shelby and Terry Mims before being given a world title try by the WBA's world Cruiserweight champion Dwight Muhammad Qawi. In what was called by Ring Magazine as the best cruiserweight bout of the 1980s, Holyfield became world champion by defeating Qawi by a narrow 15 round unanimous decision. He culminated 1986 with a trip to Paris, France, where he beat Mike Brothers by a knockout in three in a non title bout.

Holyfield began 1989 meeting another former world Heavyweight champion, Michael Dokes. This fight would also be named one of the best fights of the 1980s by Ring magazine, as best Heavyweight bout of the 1980s. Holyfield won by a knockout in the tenth round, and then he met Brazilian champion Adilson Rodrigues, who lasted 2 rounds. His last fight of the 1980s was against Alex Stewart, a fringe contender who was beaten by Holyfield in eight by a technical knockout.

In 1990, Holyfield beat Seamus McDonaugh by a knockout in four, and was by then, ranked number 1 among the world's Heavyweight challengers. By then, however, what is considered one of the biggest upsets in sports history had happened, when James Buster Douglas dismantled Tyson in 10 rounds in February at Tokyo to become the world's Heavyweight champion. And so Holyfield had no choice but to challenge Douglas instead. Holyfield became the undisputed Heavyweight champion of the world when he knocked Douglas out in three rounds.

In his first fight of 1992, he faced former world Heavyweight champion Larry Holmes, and retained the belt, once again by unanimous decision. But for his next fight, he wasn't as lucky: In the beginning of a trilogy of bouts with Riddick Bowe, he suffered his first defeat when Bowe won the world title by a 12 round decision in Las Vegas. Round 10 of that bout was named the Round of the year by Ring Magazine.

Against the wishes of his fans and the boxing community, a 42 year old Holyfield returned to the ring to face the experienced 37 year old Larry Donald, (who had lost to Bowe in a challenge for the WBO world title in 1994) on November 13, 2004. He suffered his third consecutive loss in a twelve round unanimous decision.

Holyfield's popularity has led to numerous television appearances for the boxer. His first television show appearance was the Christmas special of the Fresh Prince of Bel-Air in 1990, playing himself. In 2005, Holyfield made an appearance on ABC's Dancing with the Stars, and another on the original BBC Strictly Come Dancing "Champion of Champions" showdown, which featured the final four teams from the 2005 edition of the British series, plus two celebrities from spinoff versions, paired with British professional dancers, one featuring Holyfield paired with Karen Hardy, and Rachel Hunter paired with Darren Cole. Holyfield also had minor roles in 3 movies during the 1990's, Summer of Sam, Necessary Roughness, and Blood Salvage (which he also produced).