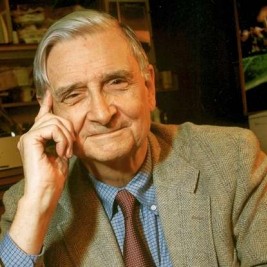 Businesses, Non-profit organizations, event planners and companies across the country have worked closely with our booking agents to hire E.O. Wilson for a speaking engagements, guest appearances, product endorsements and corporate events. Many of those same clients have continued to turn to our speakers bureau as we can easily align E.O. Wilson’s availability with their upcoming seminar, gala, annual conference, corporate function, and grand opening. Our close relationship with E.O. Wilson’s booking agent and management team further enables us to provide inquiring clients with E.O. Wilson’s speaking fee and appearance cost.

If your goal is to hire E.O. Wilson to be your next keynote speaker or to be the next brand ambassador our celebrity speakers bureau can assist. If E.O. Wilson’s booking fee is outside your companies budget or your unable to align with his appearance availability, our booking agents can provide you a list of talent that aligns with your event theme, budget and event date.

One of the world's most distinguished scientists, E.O. Wilson is a professor and honorary curator in entomology at Harvard. In 1975, he published Sociobiology: The New Synthesis, a work that described social behavior, from ants to humans. Drawing from his deep knowledge of the Earth's "little creatures" and his sense that their contribution to the planet's ecology is underappreciated, he produced what may be his most important book, The Diversity of Life. In it he describes how an intricately interconnected natural system is threatened by man's encroachment, in a crisis he calls the "sixth extinction" (the fifth one wiped out the dinosaurs). With his most recent book, The Creation, he wants to put the differences of science- and faith-based explanations aside "to protect Earth's vanishing natural habitats and species ...; in other words, the Creation, however we believe it came into existence." A recent documentary called Behold the Earth illustrates this human relationship to nature, or rather separation from an originally intended human bond with nature, through music, imagery, and thoughtful words from both Christians and scientists, including Wilson. "He more than anyone understands the relationship between genes and culture -- and it started with his ants."