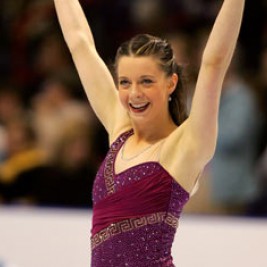 Businesses, Non-profit organizations, event planners and companies across the country have worked closely with our booking agents to hire Emily Hughes for a speaking engagements, guest appearances, product endorsements and corporate events. Many of those same clients have continued to turn to our speakers bureau as we can easily align Emily Hughes’s availability with their upcoming seminar, gala, annual conference, corporate function, and grand opening. Our close relationship with Emily Hughes’s booking agent and management team further enables us to provide inquiring clients with Emily Hughes’s speaking fee and appearance cost.

If your goal is to hire Emily Hughes to be your next keynote speaker or to be the next brand ambassador our celebrity speakers bureau can assist. If Emily Hughes’s booking fee is outside your companies budget or your unable to align with his appearance availability, our booking agents can provide you a list of talent that aligns with your event theme, budget and event date.

Emily Anne Hughes is an American figure skater. She is the 2007 U.S. National silver medalist and was a member of the 2006 Olympic team. She is a younger sister of Sarah Hughes, the 2002 Olympic champion.

Hughes qualified for her first U.S. Figure Skating Championships in the 2001–2002 season and placed 11th at the Junior level. She repeated that placement the following season. She placed 5th at the junior level at the 2003–2004 Eastern Sectional Championships and so did not qualify for the 2004 U.S. Championships.

In early August 2005, she spent nearly a week in hospital due to viral meningitis. In the 2005–2006 season, Hughes competed for the first time on the Grand Prix, placing fifth in both events. She won the bronze medal at the 2006 U.S. Figure Skating Championships. Hughes was named as first alternate to the 2006 Winter Olympics. After Michelle Kwan withdrew from the Olympics, Hughes was named to the team. She flew to Torino and placed 7th. After the Olympics, Hughes went to the 2006 World Figure Skating Championships, where she placed 8th. Hughes performs a spiral at the 2005 World Juniors.

In the 2006–2007 season, Hughes won her first medal on the Grand Prix circuit, then moved up a place at Nationals, winning the silver medal. She competed at the 2007 World Figure Skating Championships and placed ninth.

In the 2007–2008 season, Hughes placed fourth at both her Grand Prix events. On January 15, 2008, it was announced that Hughes would not compete in the 2008 U.S. Figure Skating Championships due to a hip injury that prevented her from training and competing.

On January 19, 2009, Hughes announced her withdrawal from the 2009 United States Figure Skating Championships due to an ankle injury. Later that year, Hughes took a semester off from Harvard in an attempt to qualify for the 2010 Winter Olympics. She specifically noted she wanted to qualify for the 2010 games so she could experience the Opening Ceremony, something she missed in 2006 since she was a late replacement to the team. In January 2010, she placed 9th at the 2010 US Championships and did not qualify for the USA 2010 Winter Olympics team, which only had spots for two skaters.