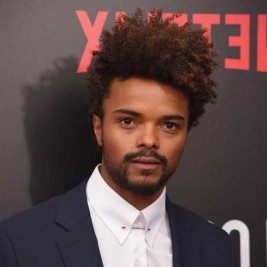 Businesses, Non-profit organizations, event planners and companies across the country have worked closely with our booking agents to hire Eka Darville for a speaking engagements, guest appearances, product endorsements and corporate events. Many of those same clients have continued to turn to our speakers bureau as we can easily align Eka Darville’s availability with their upcoming seminar, gala, annual conference, corporate function, and grand opening. Our close relationship with Eka Darville’s booking agent and management team further enables us to provide inquiring clients with Eka Darville’s speaking fee and appearance cost.

If your goal is to hire Eka Darville to be your next keynote speaker or to be the next brand ambassador our celebrity speakers bureau can assist. If Eka Darville’s booking fee is outside your companies budget or your unable to align with his appearance availability, our booking agents can provide you a list of talent that aligns with your event theme, budget and event date.

Eka Darville is an exciting young actor who stars this fall in The CW’s "Vampire Diaries" spinoff "The Originals." He plays “Diego,” the sexy and dangerous wild child of the New Orleans vampire crew. Eka recently starred in The Weinstein Company’s "The Sapphires," which received critical acclaim at the 2012 Cannes Film Festival. The film chronicles an Aboriginal all-girl singing group during their tour of Vietnam in 1968. Eka plays “Hendo,” a fun-loving drummer who seduces the band’s lead singer and introduces her to the seedier side of Vietnam.

Eka will soon be seen opposite Hugh Laurie in the title role of "Mr. Pip," directed by Andrew Adamson. The story takes place in Papua New Guinea during a raging war where the only white man on the island takes over as the schoolteacher and reads Charles Dickens’ novel ‘Great Expectations’ to his class. When a local girl becomes transfixed with the novel’s hero Pip and begins a journey of independent thought, this incites conflict with her conservative mother. Eka previously completed shooting roles on the CBS Television/CW pilot "Blink" for director Peter Hedges, J.J. Abrams’ pilot "Shelter" for Warner Bros. Television/CW and Steven Spielberg’s DreamWorks/Fox series "Terra Nova."

Additional credits include the recurring role of “Pietros” on the popular Starz series "Spartacus: Blood and Sand," series regular roles on the television series "Power Rangers R.P.M." and "Blue Water High" as well as a role in the Fox/Walden film "Nim's Island" with Jodie Foster, Gerard Butler and Abigail Breslin.