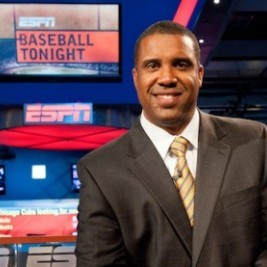 Businesses, Non-profit organizations, event planners and companies across the country have worked closely with our booking agents to hire Eduardo Perez for a speaking engagements, guest appearances, product endorsements and corporate events. Many of those same clients have continued to turn to our speakers bureau as we can easily align Eduardo Perez’s availability with their upcoming seminar, gala, annual conference, corporate function, and grand opening. Our close relationship with Eduardo Perez’s booking agent and management team further enables us to provide inquiring clients with Eduardo Perez’s speaking fee and appearance cost.

If your goal is to hire Eduardo Perez to be your next keynote speaker or to be the next brand ambassador our celebrity speakers bureau can assist. If Eduardo Perez’s booking fee is outside your companies budget or your unable to align with his appearance availability, our booking agents can provide you a list of talent that aligns with your event theme, budget and event date.

Eduardo Pérez was born September 11, 1969 in Cincinnati, Ohio and is a former Major League Baseball and Nippon Professional Baseball player. He batted and threw right-handed and joined the league in 1993 after playing college baseball under head coach Mike Martin for the Florida State University Seminoles. He is the son of baseball Hall of Famer Tony Pérez.

On June 30, 2006, Pérez was acquired by the Mariners from the Cleveland Indians for infielder Asdrúbal Cabrera, to serve as the team's designated Hitter against left-handed pitchers.

Pérez joined ESPN's Baseball Tonight 2006 postseason coverage along with current players Eric Byrnes and Vernon Wells, and former player Tino Martinez. Pérez is currently an analyst for Baseball Tonight and in 2007 he has provided commentary for the NCAA baseball regionals, the Triple-A All-Star Game and the Little League World Series regionals.

Pérez is now the coach for the Leones de Ponce in Puerto Rico, and was named 2008 Manager of the Year in the Puerto Rico Baseball League.

On February 11, 2014, ESPN announced that Pérez had rejoined the network as a studio and game analyst.

During the winter of 2014-2015 Perez served as the manager of the Santurce Crabbers in the Puerto Rican Winter League. The Crabbers won the league championship and participated in the Caribbean World Series.