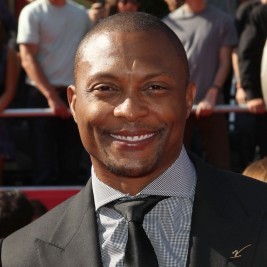 Businesses, Non-profit organizations, event planners and companies across the country have worked closely with our booking agents to hire Eddie George for a speaking engagements, guest appearances, product endorsements and corporate events. Many of those same clients have continued to turn to our speakers bureau as we can easily align Eddie George’s availability with their upcoming seminar, gala, annual conference, corporate function, and grand opening. Our close relationship with Eddie George’s booking agent and management team further enables us to provide inquiring clients with Eddie George’s speaking fee and appearance cost.

If your goal is to hire Eddie George to be your next keynote speaker or to be the next brand ambassador our celebrity speakers bureau can assist. If Eddie George’s booking fee is outside your companies budget or your unable to align with his appearance availability, our booking agents can provide you a list of talent that aligns with your event theme, budget and event date.

Eddie George is a former NFL football player.  He began his playing days at Abington Senior High School before transferring to Fork Union Military Academy.  While at Fork Union, George rushed for over 1,200 yards and 22 touchdowns as a senior.  George ultimately was recruited by Ohio State University, where he eventually won the Heisman Trophy.

Following his senior season, he was the first-round draft selection of the Houston Oilers, now the Tennessee Titans. In 1996, George won the NFL Rookie of the Year award.  During his career with the Titans, he was a 4 time Pro Bowl selection and led the team to a Super Bowl appearance.

After his career with the Titans, Eddie went on to play for the Dallas Cowboys for only one year.  Since the 2005 NFL season, Eddie has been out of football although he has not announced his retirement.

He is now involved with his own restaurant, Eddie George Sports Grille, and has begun hosting a new television series, G4's Training Camp.