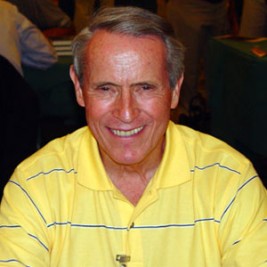 Businesses, Non-profit organizations, event planners and companies across the country have worked closely with our booking agents to hire Ed Gibson for a speaking engagements, guest appearances, product endorsements and corporate events. Many of those same clients have continued to turn to our speakers bureau as we can easily align Ed Gibson’s availability with their upcoming seminar, gala, annual conference, corporate function, and grand opening. Our close relationship with Ed Gibson’s booking agent and management team further enables us to provide inquiring clients with Ed Gibson’s speaking fee and appearance cost.

If your goal is to hire Ed Gibson to be your next keynote speaker or to be the next brand ambassador our celebrity speakers bureau can assist. If Ed Gibson’s booking fee is outside your companies budget or your unable to align with his appearance availability, our booking agents can provide you a list of talent that aligns with your event theme, budget and event date.

Awarded a National Science Foundation Fellowship and a R. C. Baker Fellowship at the California Institute of Technology, and listed in several Who's Who Publications. He received the JSC Certificate of Commendation (1970), the NASA Distinguished Service Medal (presented by President Richard M. Nixon in 1974), the City of New York Gold Medal (1974), the Robert J. Collier Trophy for 1973 (1974), the Dr. Robert H. Goddard Memorial Trophy for 1975 (1975), the Federation Aeronautique Internationale's De La Vaulx Medal and V. M. Komarov Diploma for 1974 (1975), the American Astronautical Society's 1975 Flight Achievement Award (1976), the AIAA Haley Astronautics Award for 1975 (1976), a Senior U.S. Scientist Award from the Alexander von Humboldt Foundation (1976), and a JSC Special Achievement Award (1978).

While studying at Caltech, Ed Gibson was a research assistant in the field of jet propulsion and classical physics. His technical publications are in the fields of plasma physics and solar physics. He was senior research scientist with the Applied Research Laboratories of Philco Corporation at Newport Beach, California, from June 1964 until coming to NASA. While at Philco, he did research on lasers and the optical breakdown of gases. Subsequent to joining NASA in 1965, he wrote a textbook in solar physics entitled "The Quiet Sun." Gibson's training and data acquisition as science-pilot on the last Skylab mission were in the areas of solar physics, comet observations, stellar observations, earth resources studies, space medicine and physiology, and flight surgeon activities.

NASA EXPERIENCE: Dr. Gibson was selected as a scientist-astronaut by NASA in June 1965. He completed a 53-week course in flight training at Williams Air Force Base, Arizona, and earned his Air Force wings. Since then, he has flown helicopters and the T-38.

Dr. Gibson was selected as a scientist-astronaut by NASA in June 1965. He completed a 53-week course in flight training at Williams Air Force Base, Arizona, and earned his Air Force wings. Since then, he has flown helicopters and the T-38.

He served as a member of the astronaut support crew and as a capcom for the Apollo 12 lunar landing. He has also participated in the design and testing of many elements of the Skylab space station.

Dr. Gibson was the science-pilot of Skylab 4, launched November 16, 1973, and concluded February 8, 1974. This was the longest manned flight in history of manned space exploration to date. Dr. Gibson was accompanied on the record-setting 34.5-million-mile flight by Gerald P. Carr and William R. Pogue. They successfully completed 56 experiments, 26 science demonstrations, 15 subsystem detailed objectives, and 13 student investigations during their 1,214 revolutions of the earth. They also acquired a wide variety of earth resources observations data using Skylab's earth resources experiment package camera and sensor array. Dr. Gibson was the crewman primarily responsible for the 338 hours of Apollo Telescope Mount operation, which made extensive observations of solar processes.

Until March 1978, Dr. Gibson and his Skylab-4 teammates held the world record for individual time in space: 2,017 hours 15 minutes 32 seconds, and Dr. Gibson logged 15 hours and 17 minutes in three EVAs outside the orbital workshop.

Gibson resigned from NASA in December 1974 to do research on Skylab solar physics data as a senior staff scientist with the Aerospace Corporation of Los Angeles, California. Beginning in March 1976, he served for 1 year as a consultant to ERNO Raumfahrttechnik GmbH, in West Germany, on Spacelab design under the sponsorship of a U. S. Senior Scientist Award form the Alexander von Humboldt Foundation. In March 1977, Dr. Gibson returned to the Astronaut Office Astronaut candidate selection and training as Chief of the Scientist-Astronaut Candidates.