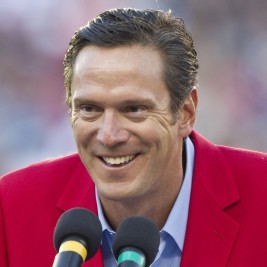 Businesses, Non-profit organizations, event planners and companies across the country have worked closely with our booking agents to hire Drew Bledsoe for a speaking engagements, guest appearances, product endorsements and corporate events. Many of those same clients have continued to turn to our speakers bureau as we can easily align Drew Bledsoe’s availability with their upcoming seminar, gala, annual conference, corporate function, and grand opening. Our close relationship with Drew Bledsoe’s booking agent and management team further enables us to provide inquiring clients with Drew Bledsoe’s speaking fee and appearance cost.

If your goal is to hire Drew Bledsoe to be your next keynote speaker or to be the next brand ambassador our celebrity speakers bureau can assist. If Drew Bledsoe’s booking fee is outside your companies budget or your unable to align with his appearance availability, our booking agents can provide you a list of talent that aligns with your event theme, budget and event date.

Bledsoe started for the Patriots in his rookie season, as the Patriots improved from 2 wins to 5 wins. The 1994 season was arguably Bledsoe's best. On Nov. 13 the Patriots had won just 3 of their first 9 games and were down 20 to 3 at half time against the Minnesota Vikings. Bledsoe led a comeback victory in which the Patriots won 26 - 20 in overtime, as he set single game records in pass completions and attempts.The Patriots did not lose a game the rest of the season and made their first postseason appearance in eight years.

Bledsoe set an NFL record pass attempts, became the second NFL quarterback to ever complete 400 or more passes in a season, and led the NFL in passing yards. In March 2001, Bledsoe was signed to a "then-record" ten-year, $103 million contract. Drew finished his career with the Dallas Cowboys in 2006.