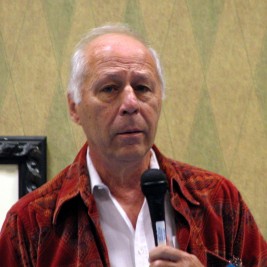 Businesses, Non-profit organizations, event planners and companies across the country have worked closely with our booking agents to hire Dr. Ben Bova for a speaking engagements, guest appearances, product endorsements and corporate events. Many of those same clients have continued to turn to our speakers bureau as we can easily align Dr. Ben Bova’s availability with their upcoming seminar, gala, annual conference, corporate function, and grand opening. Our close relationship with Dr. Ben Bova’s booking agent and management team further enables us to provide inquiring clients with Dr. Ben Bova’s speaking fee and appearance cost.

If your goal is to hire Dr. Ben Bova to be your next keynote speaker or to be the next brand ambassador our celebrity speakers bureau can assist. If Dr. Ben Bova’s booking fee is outside your companies budget or your unable to align with his appearance availability, our booking agents can provide you a list of talent that aligns with your event theme, budget and event date.

In his planetary science fiction series: MOONWAR, MARS, VENUS, JUPITER, SATURN, and MERCURY, he combines romance, adventure, and the highest degree of scientific accuracy to explore the impact of future technological developments on individual human lives and society as a whole. With his near future novel THE PRECIPICE, Bova introduced "The Asteroid Wars," a trilogy that deals with the development and the resources of the Asteroid Belt. ROCK RATS is the second book of this trilogy, and THE SILENT WAR is the conclusion. With his nonfiction books, such as IMMORTALITY and SPACE FLIGHT, Bova shows how modern technology can be used to solve economic, social and political problems.

Ben Bova's involvement in the science and high technology fields goes back to the very beginnings of the space age. He began as a newspaper reporter, and for several years wrote articles, opinion pieces and reviews which have appeared in Scientific American, Nature, The New York Times, The Wall Street Journal, to name a few. Bova became Editor of Analog magazine, and subsequently, Editorial Director of Omni. For excellence in service, he has received the Science Fiction Achievement Award"the Hugo"for Best Professional Editor six times. In 1974, he was the recipient of the E.E. Smith Memorial Award for Imaginative Fiction, and in 1983 he was named the winner of the Balrog Award for Professional Achievement. Bova received the Inkpot Award for his outstanding achievements in science fiction in 1985. In 1996, he won the Isaac Asimov Memorial Award and his novel, MOONRISE, was voted the best science fiction novel by Library Journal. In 2005, Ben Bova received the Arthur C. Clarke Foundation's Lifetime Achievement Award for his writings that have, according to the foundation, "deepened public understanding of science and technology, and their impact on humanity."

Bova was a technical editor on Project Vanguard, the first American artificial satellite program. He has written scripts for teaching films with the Physical Sciences Study Committee in association with Nobel Laureates from many universities. He then became the Manager of Marketing for Avco Everett Research Laboratory in Massachusetts where he worked with leading scientists in such fields as high-power lasers, artificial hearts and advanced electrical power generators. Bova is a member of the Board of Governors of the National Space Society, a Fellow of the British Interplanetary Society, a charter member of the Planetary Society, a member of the American Association for the Advancement of Science, and a member of the board of contributors of USA Today.

Dr. Ben Bova is a widely popular lecturer. He has taught science fiction at Harvard University and at the Hayden Planetarium in New York City, where he has also directed film courses. He lectures regularly on topics dealing with the prospects for human immortality, the impact of science on politics, space, the craft of writing, and the art of predicting the future. A past president of Science Fiction and Fantasy Writers of America, he is a frequent commentator on radio and television, having appeared on hundreds of radio and television broadcasts, and has been a regular guest on "CBS Morning News," "Good Morning America," and "The Today Show." As an expert consultant, he has worked with filmmakers and television producers such as Woody Allen, George Lucas, and Gene Roddenberry.