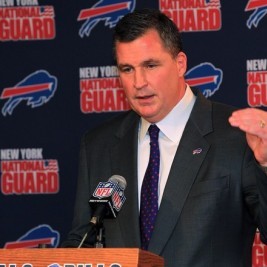 Businesses, Non-profit organizations, event planners and companies across the country have worked closely with our booking agents to hire Doug Marrone for a speaking engagements, guest appearances, product endorsements and corporate events. Many of those same clients have continued to turn to our speakers bureau as we can easily align Doug Marrone’s availability with their upcoming seminar, gala, annual conference, corporate function, and grand opening. Our close relationship with Doug Marrone’s booking agent and management team further enables us to provide inquiring clients with Doug Marrone’s speaking fee and appearance cost.

If your goal is to hire Doug Marrone to be your next keynote speaker or to be the next brand ambassador our celebrity speakers bureau can assist. If Doug Marrone’s booking fee is outside your companies budget or your unable to align with his appearance availability, our booking agents can provide you a list of talent that aligns with your event theme, budget and event date.

Douglas Charles Marrone born July 25, 1964 is currently the offensive line coach and assistant to the head coach of the Jacksonville Jaguars. He was previously the head coach at Syracuse University from 2009 to 2012 and the Buffalo Bills head coach from 2013 to 2014, compiling a career college football record of 25–25 and an NFL record of 15–17. Before that he served as offensive coordinator for the New Orleans Saints from 2006 to 2008. On December 11, 2008, he was chosen as Syracuse University's head football coach after the 2008 season by athletic director Daryl Gross. On January 6, 2013, he was chosen to succeed Chan Gailey as head coach of the Buffalo Bills. His overall record as head coach of the Bills was 15-17. In 2014, the Buffalo Bills finished with a record of 9-7, second place in the AFC East and two wins away from making the playoffs. This was the Bills first winning season in 10 years. At the end of the 2014 season it was revealed that Marrone had a three-day out clause in his contract, in which he could resign and still collect his full 2015 salary. Marrone exercised the out clause and resigned on December 31, 2014. After Marrone quit, several players expressed their displeasure and disgust with both the decision and the way that he informed the team; one of the captains and the longest-tenured player on the team, running back Fred Jackson, said it was "like getting punched in the stomach." Marrone interviewed with the New York Jets after opting out of his contract with the Bills; his interview did not go well. On January 20, 2015, the Jacksonville Jaguars hired Marrone to be an assistant to the head coach and offensive line coach