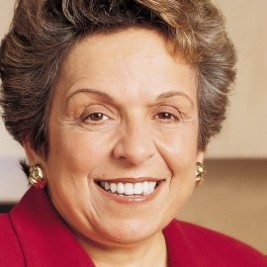 Businesses, Non-profit organizations, event planners and companies across the country have worked closely with our booking agents to hire Donna Shalala for a speaking engagements, guest appearances, product endorsements and corporate events. Many of those same clients have continued to turn to our speakers bureau as we can easily align Donna Shalala’s availability with their upcoming seminar, gala, annual conference, corporate function, and grand opening. Our close relationship with Donna Shalala’s booking agent and management team further enables us to provide inquiring clients with Donna Shalala’s speaking fee and appearance cost.

If your goal is to hire Donna Shalala to be your next keynote speaker or to be the next brand ambassador our celebrity speakers bureau can assist. If Donna Shalala’s booking fee is outside your companies budget or your unable to align with his appearance availability, our booking agents can provide you a list of talent that aligns with your event theme, budget and event date.

Donna E. Shalala became professor of Political Science and president of the University of Miami on June 1, 2001. Shalala has more than 40 years of experience as an accomplished scholar, teacher and administrator.

Born in Cleveland, Ohio, Shalala received her A.B. degree in history from Western College for Women and her Ph.D. degree from The Maxwell School of Citizenship and Public Affairs at Syracuse University. She has held tenured professorships at Columbia University, the City University of New York (CUNY) and the University of Wisconsin - Madison. She served as president of Hunter College of CUNY from 1980 to 1987 and as chancellor of the University of Wisconsin-Madison from 1987 to 1993. One of the country's first Peace Corps volunteers, she served in Iran from 1962 to 1964.

In 1993, President Clinton appointed her U.S. Secretary of Health and Human Services (HHS) where she served for eight years, becoming the longest serving HHS Secretary in U.S. history. At the beginning of her tenure, HHS had a budget of nearly $600 billion, which included a wide variety of programs including Social Security, Medicare, Medicaid, Child Care and Head Start, Welfare, the Public Health Service, the National Institutes of Health (NIH), the Centers for Disease Control and Prevention (CDC) and the Food and Drug Administration (FDA).

As HHS Secretary, she directed the welfare reform process, made health insurance available to millions of children through the approval of all State Children's Health Insurance Programs (SCHIP), raised child immunization rates to the highest levels in history, led major reforms of the FDA's drug approval process and food safety system, revitalized the National Institutes of Health and directed a major management and policy reform of Medicare. At the end of her tenure as HHS Secretary, The Washington Post described her as "one of the most successful government managers of modern times." In 2007, President George W. Bush handpicked Shalala to co-chair with Senator Bob Dole the Commission on Care for Returning Wounded Warriors, to evaluate how wounded service members transition from active duty to civilian society.

As chancellor of the University of Wisconsin-Madison, she led what was then the nation's largest public research university. In 1992, BusinessWeek named her one of the top five managers in higher education.

She served in the Carter administration as assistant secretary for Policy Development and Research at the U.S. Department of Housing and Urban Development. In 1980, she assumed the presidency of Hunter College of the City University of New York.

She is a director of MEDNAX, Inc.

Shalala has more than four dozen honorary degrees and a host of other honors, including the 1992 National Public Service Award, the 1994 Glamour magazine Woman of the Year Award and in 2005 was named one of "America's Best Leaders" by U.S. News & World Report and the Center for Public Leadership at Harvard University's Kennedy School of Government.