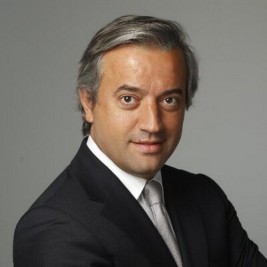 If your goal is to hire Dominique Delport to be your next keynote speaker or to be the next brand ambassador our celebrity speakers bureau can assist. If Dominique Delport’s booking fee is outside your companies budget or your unable to align with his appearance availability, our booking agents can provide you a list of talent that aligns with your event theme, budget and event date.

Mr. Dominique Delport was born on November 21, 1967. He is a graduate of the EM Lyon (École Supérieure de Commerce de Lyon) and a winner of the MBA Moot Corp International Challenge hosted by the University of Texas, Austin, and also the recipient of an Emmy Award.

He has had three distinct professional careers: television journalist, Internet entrepreneur, and head of a media agency, which gives him expertise in content, digital and media at the international level.

In April 2000, he gave up his career in television to move into the world of start-ups, forming the young streaming multimedia company “Streampower”, where he served as Chairman-CEO.

In October 2001, Streampower became a 75% subsidiary of the Rivaud Media group (Bolloré Group).

In 2003, Dominique Delport launched a daily program on Canal+, “Merci pour l’info”, and in 2004 he created and produced for France 5 the program “C.U.L.T.”, an interactive televised broadcast on urban cultures featuring live videos from bloggers.

After participating in the launch of Direct 8 (TNT), Dominique Delport hosted the weekly show titled “8-Fi”, a live broadcast devoted to new media and technologies.

Dominique Delport joined Media Planning Group (MPG) on February 1, 2006 as Managing Director, while retaining his position as Chairman-CEO at Streampower. He was appointed Chief Executive of MPG France in June 2006 and then, in February 2007, Managing Director of Havas Media France.

In February 2008, he was promoted to the position of Chairman-Managing Director of Havas Media France, a position he held until the end of 2015.

In February 2009, he was elected to a two-year term as President of the Union of Media Consulting and Purchasing (UDECAM), the organization for all French media agencies.

Following the success of the integrated organization of Havas Media France, he was named CEO of the Havas Media group global network.

As a member of the Executive Committee of Havas Media group, today, he supervises all brands, customers, commercial activities, research and the economic watch for the group’s 126 markets, under the direction of Yannick Bolloré, Chairman-CEO of Havas.

In November 2013, he was given direct responsibility for Havas Media group in the United Kingdom as Chairman.

He is also a member of the Facebook Client Council.

“Campaign” magazine ranked him in the “Top 3 UK Media Suit” in 2013, and according to the barometer TweetBosses he is one of the most followed Chairman-CEOs on social media in France.