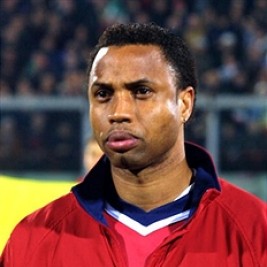 Businesses, Non-profit organizations, event planners and companies across the country have worked closely with our booking agents to hire David Regis for a speaking engagements, guest appearances, product endorsements and corporate events. Many of those same clients have continued to turn to our speakers bureau as we can easily align David Regis’s availability with their upcoming seminar, gala, annual conference, corporate function, and grand opening. Our close relationship with David Regis’s booking agent and management team further enables us to provide inquiring clients with David Regis’s speaking fee and appearance cost.

If your goal is to hire David Regis to be your next keynote speaker or to be the next brand ambassador our celebrity speakers bureau can assist. If David Regis’s booking fee is outside your companies budget or your unable to align with his appearance availability, our booking agents can provide you a list of talent that aligns with your event theme, budget and event date.

David Regis began his pro career in 1988 with Valenciennes and played there until 1993. He then transferred to Strasbourg in 1993, Lens in 1996, and Karlsruhe in 1997. That last move was designed to get noticed by the French national team by playing in Germany's Bundesliga, a league considered superior to France's Ligue 1. But when interest was not shown by the French, Regis looked for other options to play internationally.

Since Regis' wife was an American citizen, an option to play for the United States appeared. Steve Sampson, the U.S. national coach, jumped at the chance of having an experienced left back on the World Cup squad,and Regis was naturalized on May 20, 1998 and received his first cap against Kuwait just three days later. Despite speaking very little English and playing with the team for the first time less than a month before the World Cup started, Regis received the starting spot from Sampson in front of long-time starter Jeff Agoos. To add insult to injury, Agoos had to room with Regis and teach him English in the process.

Regis played all three matches in the World Cup, as the U.S. lost all three. He transferred to Metz after the tournament, spent four years there, and then spent a season at Troyes. Regis made the U.S. roster for the 2002 World Cup as well, but this time did not play a minute. He retired with 28 caps for his adopted country. Since the 04/05 season, Regis has spent his time playing in the lower levels of the Belgian leagues with FC Bleid.