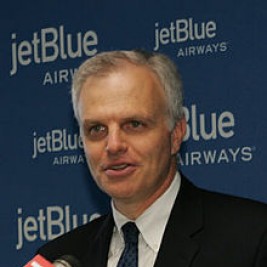 Businesses, Non-profit organizations, event planners and companies across the country have worked closely with our booking agents to hire David Neeleman for a speaking engagements, guest appearances, product endorsements and corporate events. Many of those same clients have continued to turn to our speakers bureau as we can easily align David Neeleman’s availability with their upcoming seminar, gala, annual conference, corporate function, and grand opening. Our close relationship with David Neeleman’s booking agent and management team further enables us to provide inquiring clients with David Neeleman’s speaking fee and appearance cost.

If your goal is to hire David Neeleman to be your next keynote speaker or to be the next brand ambassador our celebrity speakers bureau can assist. If David Neeleman’s booking fee is outside your companies budget or your unable to align with his appearance availability, our booking agents can provide you a list of talent that aligns with your event theme, budget and event date.

He co-founded (with June Morris) Morris Air, a low-fare charter airline, and from 1984 to 1988, he was executive vice president of the company. In 1988 Neeleman assumed the helm of Morris Air as its president. In 1993, when Morris Air was acquired by Southwest Airlines for $130 million (Neeleman received $25 million from the sale), he worked for 5 months on their Executive Planning Committee. After leaving Southwest, Neeleman became the CEO of Open Skies, a touch screen airline reservation and check-in systems company, later acquired by HP in 1999. At the same time, he helped with another upstart airline, WestJet. JetBlue was incorporated in Delaware in August 1998 and officially founded in February 1999, under the name "NewAir" by Neeleman. As the CEO of JetBlue Airways, his 2002 salary was $200,000 with a bonus of $90,000. Neeleman donated his entire salary to the JetBlue Crewmember Crisis Fund, which was established for JetBlue employees who had fallen on hard times. On May 10, 2007, David Neeleman was replaced by David Barger (born 1959) as CEO of JetBlue and on May 21, 2008 he was replaced as chairman of the board by Joel Peterson. On March 27, 2008 Neeleman officially announced plans to launch a new airline, Azul (Portuguese for "blue"), a domestic carrier in Brazil. Azul will complete 2013 with over 5 Billion in sales and currently stands as Brazil's third largest airline. On October 30, 2013 Neeleman and his youngest brother Mark James Neeleman, a cofounder of Azul, announced the launch of a new company, Vigzul, a home security and monitoring company. Vigzul came from an idea of Mark Neeleman and was founded by David Allred, Brett Chambers and Neeleman serves as Chairman of the board and principal investor.
Read More About David Neeleman