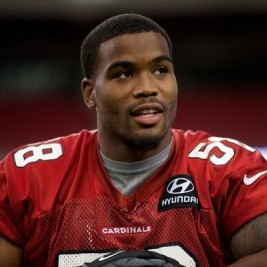 If your goal is to hire Daryl Washington to be your next keynote speaker or to be the next brand ambassador our celebrity speakers bureau can assist. If Daryl Washington’s booking fee is outside your companies budget or your unable to align with his appearance availability, our booking agents can provide you a list of talent that aligns with your event theme, budget and event date.

In 2010 Washington had 78 tackles, one sack, one forced fumble, and one interception that he fumbled.

Having started at inside linebacker since his rookie-season in 2010, Washington has emerged to become among the best linebackers in NFL, being named to the 2012 All-Pro Team as well as being selected to participate in the 2013 Pro Bowl as an alternate for the NFC roster.

Washington agreed to a six-year contract extension on September 6, 2012.