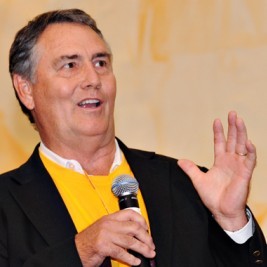 Businesses, Non-profit organizations, event planners and companies across the country have worked closely with our booking agents to hire Danny White for a speaking engagements, guest appearances, product endorsements and corporate events. Many of those same clients have continued to turn to our speakers bureau as we can easily align Danny White’s availability with their upcoming seminar, gala, annual conference, corporate function, and grand opening. Our close relationship with Danny White’s booking agent and management team further enables us to provide inquiring clients with Danny White’s speaking fee and appearance cost.

If your goal is to hire Danny White to be your next keynote speaker or to be the next brand ambassador our celebrity speakers bureau can assist. If Danny White’s booking fee is outside your companies budget or your unable to align with his appearance availability, our booking agents can provide you a list of talent that aligns with your event theme, budget and event date.

Danny White is a former quarterback and punter for the Dallas Cowboys and an American football coach in the Arena Football League. He has been the color commentator for Cowboys games on Compass Media Networks' America's Team Radio Network since the 2011 season.

White had a stellar career as a quarterback and punter at Arizona State University and subsequently appeared briefly in the World Football League before catching on with the National Football League's Dallas Cowboys. Through 1979 he appeared primarily as a punter and backup to star quarterback Roger Staubach, but after Staubach's retirement following the end of that season he became the starting quarterback himself and for a few years did double-duty as its punter until around 1984.

He made the pro bowl in 1982 and led the Cowboys to three consecutive NFC championship games (1980-1982), but was widely criticized after the Cowboys lost each of the three despite having been favored in all three games; indeed, a few years after retiring he became involved in a minor automobile accident with a 17-year-old motorist, who referred to White as "you choking dog" once he realized who the driver of the other vehicle was.

His career as a coach began shortly after his playing career ended, but he was widely regarded, like Staubach before him, as knowledgeable of the game and as something as a coach on the field even while still an active player, so his success in the Arena Football League, where he led the Rattlers to two Arena Bowl championships and three other ArenaBowl game appearances, and as an analyst, is unsurprising.