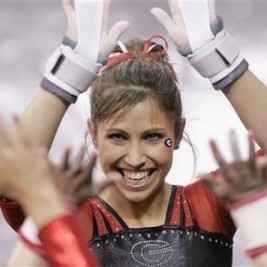 If your goal is to hire Courtney Kupets to be your next keynote speaker or to be the next brand ambassador our celebrity speakers bureau can assist. If Courtney Kupets’s booking fee is outside your companies budget or your unable to align with his appearance availability, our booking agents can provide you a list of talent that aligns with your event theme, budget and event date.

She is best known for her 2003 and 2004 all-around national championships (with Carly Patterson as co-champion in 2004); her membership on the 2002 and 2003 World Artistic Gymnastics Championships and 2004 Olympic teams; and her individual bronze medal on the uneven bars at the 2004 Olympics.

During her elite career, Kupets resided in Gaithersburg, Maryland and trained at Hill's Angels, former gym of Olympians Dominique Dawes and Elise Ray, for 35 hours each week. Her older sister, Ashley Kupets, is a gymnast at the University of Georgia, and her father was a college football player.

While the uneven bars is considered to be Kupets' best apparatus, she excels on the other events as well. During her elite career, her balance beam routine was valued at a 10.0 start value, the same as her bars routine. Her lowest-valued skill was her Podkopayeva vault, which had a 9.7. start value under the 2001-2005 Code of Points. Kupet's floor exercise routine was valued at a 9.9 usually - until 2004, where she had a 9.8 Start Value routine. She also had a reputation as one of the USA's most versatile tumblers, performing, at various points in her career, the double layout, triple twist, double Arabian, double front, double pike and various combination tumbling passes.