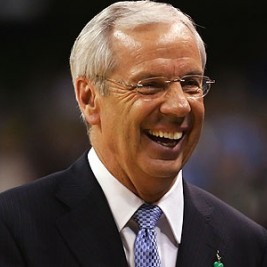 If your goal is to hire Coach Roy Williams to be your next keynote speaker or to be the next brand ambassador our celebrity speakers bureau can assist. If Coach Roy Williams’s booking fee is outside your companies budget or your unable to align with his appearance availability, our booking agents can provide you a list of talent that aligns with your event theme, budget and event date.

Roy Williams was born August 1, 1950 and is a college basketball coach, who is currently the head coach of the men's North Carolina Tar Heels basketball team at the University of North Carolina in Chapel Hill, North Carolina. He first started his college coaching career at University of North Carolina as an assistant coach for Dean Smith in 1978. In 1988, Williams became the head coach of the men's basketball team at University of Kansas, where he took them to fourteen consecutive NCAA tournaments, collecting an 80% win percentage, and winning nine conference titles over his fifteen year span at Kansas. In 2003, Williams left Kansas to go back home to be the head coach at North Carolina replacing Matt Doherty. While Williams has been at North Carolina he has won six ACC conference titles, two ACC Coach of the Year awards in 2006 and 2011. He is second all-time for most wins at Kansas behind Phog Allen and at North Carolina behind mentor Dean Smith. Additionally, he is eighth all-time in the NCAA for winning percentage. Williams has over 700 career wins and is the fastest to reach this milestone to date. Williams has taken his teams to seven Final Fours in his careers at Kansas and North Carolina and is one of only two coaches (along with Rick Pitino) in NCAA history to have led two different programs to at least three Final Fours each. On April 4, 2005, Williams shed his title as "the most successful coach to never have won an NCAA ring" as his Tar Heels defeated the University of Illinois in the 2005 NCAA championship game. In 2007, Williams was inducted into the Basketball Hall of Fame. He would again lead the Tar Heels to another National Championship victory on April 6, 2009 against the Michigan State Spartans in the 2009 NCAA championship game.