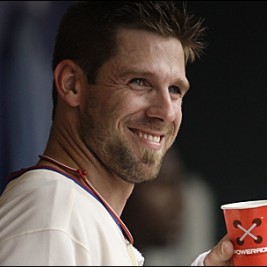 Businesses, Non-profit organizations, event planners and companies across the country have worked closely with our booking agents to hire Cliff Lee for a speaking engagements, guest appearances, product endorsements and corporate events. Many of those same clients have continued to turn to our speakers bureau as we can easily align Cliff Lee’s availability with their upcoming seminar, gala, annual conference, corporate function, and grand opening. Our close relationship with Cliff Lee’s booking agent and management team further enables us to provide inquiring clients with Cliff Lee’s speaking fee and appearance cost.

If your goal is to hire Cliff Lee to be your next keynote speaker or to be the next brand ambassador our celebrity speakers bureau can assist. If Cliff Lee’s booking fee is outside your companies budget or your unable to align with his appearance availability, our booking agents can provide you a list of talent that aligns with your event theme, budget and event date.

Cliff Lee is an American professional baseball player. He is a starting pitcher for the Philadelphia Phillies. He stands 6 feet 3 inches and weighs 205 pounds. He was born in Benton, Arkansas. Lee played baseball at Benton High School and attended Meridian Community College and the University of Arkansas before being drafted by the Montreal Expos in the twentieth round of the 2000 draft.

After playing with the Expos minor-league affiliate Harrisburg Senators, Lee was traded to the Cleveland Indians and went to the major leagues later that season. He was traded to the Phillies in 2009, went to the Seattle Mariners and Texas Rangers, and returned to the Phillies in 2011. A four-time All-Star, Lee won the American League Cy Young Award in 2008 as a member of the Indians after he led the American League in wins and lowest earned run average. In the 2009 World Series, Lee started two games for the Phillies against the New York Yankees. The Phillies won both games that he started, which included a complete game in the first game.

Lee is left-handed and throws three fastballs: a two-seam, four-seam and cutter. His pitches also include a slider, curveball and change-up.