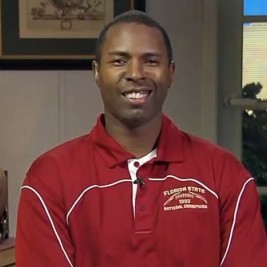 Businesses, Non-profit organizations, event planners and companies across the country have worked closely with our booking agents to hire Charlie Ward for a speaking engagements, guest appearances, product endorsements and corporate events. Many of those same clients have continued to turn to our speakers bureau as we can easily align Charlie Ward’s availability with their upcoming seminar, gala, annual conference, corporate function, and grand opening. Our close relationship with Charlie Ward’s booking agent and management team further enables us to provide inquiring clients with Charlie Ward’s speaking fee and appearance cost.

If your goal is to hire Charlie Ward to be your next keynote speaker or to be the next brand ambassador our celebrity speakers bureau can assist. If Charlie Ward’s booking fee is outside your companies budget or your unable to align with his appearance availability, our booking agents can provide you a list of talent that aligns with your event theme, budget and event date.

Charlie Ward is a former standout athlete in college and the 1993 Heisman Trophy winner.  He was the starting quarterback at Florida State University where he led the Seminoles to their first ever National Championship.  He was only the second African-American quarterback to win the award.

Although Ward didn't play baseball in college, he was selected by the Milwaukee Brewers in the 1993 MLB Draft.  He decided not to play baseball and returned for his senior season at Florida State.  Upon graduation, Ward made it clear that he did not want to enter the NFL Draft, rather he wanted to play in the NBA.  In the 1994 NBA Draft, Ward was selected in the first round by the New York Knicks.

During his NBA career, Ward established himself as a good three-point shooter, a reliable ball distributor, and a respected floor leader. Although he led his team to the 1999 NBA Finals, he never did win a championship in the NBA.  After nagging injuries throughout his career, he decided to retire early.

Ward was elected to the College Football Hall of Fame in 2006.