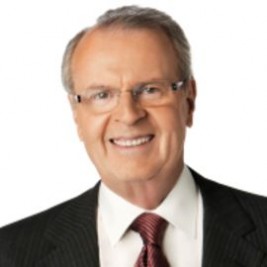 Businesses, Non-profit organizations, event planners and companies across the country have worked closely with our booking agents to hire Charles Osgood for a speaking engagements, guest appearances, product endorsements and corporate events. Many of those same clients have continued to turn to our speakers bureau as we can easily align Charles Osgood’s availability with their upcoming seminar, gala, annual conference, corporate function, and grand opening. Our close relationship with Charles Osgood’s booking agent and management team further enables us to provide inquiring clients with Charles Osgood’s speaking fee and appearance cost.

If your goal is to hire Charles Osgood to be your next keynote speaker or to be the next brand ambassador our celebrity speakers bureau can assist. If Charles Osgood’s booking fee is outside your companies budget or your unable to align with his appearance availability, our booking agents can provide you a list of talent that aligns with your event theme, budget and event date.

Charles Osgood, often referred to as CBS News' poet-in-residence, has been anchor of CBS News Sunday Morning since 1994.

He also anchors and writes "The Osgood File," his daily news commentary broadcast on the CBS Radio Network. Osgood's commentaries draw one of the largest audiences of any network radio feature. He was called "one of the last great broadcast writers" by his predecessor on Sunday Morning, Charles Kuralt.

Osgood is the recipient of the 2005 Paul White Award, presented by the Radio-Television News Directors Association for lifetime contribution to electronic journalism. Also in 2005, Osgood received the Walter Cronkite Excellence in Journalism Award from Arizona State University. He was inducted into the Broadcasting and Cable Hall of Fame in 2000 and joined the ranks of the National Association of Broadcasters Hall of Fame in 1990. He has received some of the highest accolades in broadcast journalism, including a 1999 International Radio and Television Society Foundation (IRTS) Award for significant achievement.

The Osgood File has earned its author five coveted Washington Journalism Review “Best in the Business Awards.” Osgood received a 1999 Radio Mercury Award, a 1996 President's Award from the American Society of Composers, Authors and Publishers for outstanding coverage and support of music creators and a 1993 Marconi Radio Award.

He has been an anchor and reporter for many CBS News broadcasts, including the CBS Morning News, the CBS Evening News With Dan Rather and the CBS Sunday Night News. Before joining CBS News in September 1971, Osgood was an anchor/reporter for WCBS News Radio 88 in New York (1967-71). Prior to that, he worked for ABC News, was the general manager of WHCT-TV Hartford, Conn., and the program director and manager of WGMS Radio Washington, D.C.

Osgood, who recently edited Funny Letters From Famous People (Broadway Books, 2003) and Kilroy Was Here (Hyperion, 2001), a book on American humor from the World War II era, is the author of six books. They are Nothing Could Be Finer Than a Crisis That Is Minor in the Morning (Holt, Rinehart & Winston, 1979), There's Nothing I Wouldn't Do if You Would Be My POSSLQ (Holt, Rinehart & Winston, 1981), Osgood on Speaking: How to Think on Your Feet without Falling on Your Face (William Morrow and Company, 1988), The Osgood Files (G. P. Putnam's Sons, 1991), See You on the Radio (G.P. Putnam's Sons, 1999) and his latest, Defending Baltimore Against Enemy Attack (Hyperion, 2004.)

Osgood was born in New York. He was graduated from Fordham University in 1954 with a B.S. degree in economics and holds honorary doctorates from 11 institutions of higher learning. He has served as a trustee for Fordham University and St. Bonaventure, is an overseer at Colby College and a trustee at the School of Strings in Manhattan. Osgood has performed with the Mormon Tabernacle Choir and played the piano and banjo with the New York Pops and Boston Pops Orchestras.

He lives in New York City with his wife, Jean. They have five children.