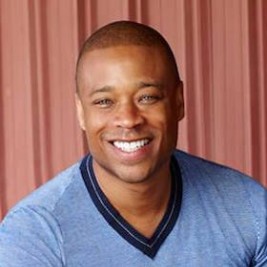 If your goal is to hire Charles Mattocks to be your next keynote speaker or to be the next brand ambassador our celebrity speakers bureau can assist. If Charles Mattocks’s booking fee is outside your companies budget or your unable to align with his appearance availability, our booking agents can provide you a list of talent that aligns with your event theme, budget and event date.

Each career move Celebrity Chef Mattocks has made has been in keeping with his desire to touch lives in a positive way. Inspired by his uncle, the late Bob Marley, Mattocks dared to dream big. After giving a stunning performance in the title role of the Emmy nominated "The Summer of Ben Tyler," Mattocks could have continued as a successful actor. Instead this single dad decided the Hollywood lifestyle was not the best for his young son and moved across the country.

His need to create meals that were tasty, nutritious, and affordable led to his career as "The Poor Chef." Appearances on "The Today Show," "Good Morning America," "Martha Stewart," CNN and "Dr. Oz" gave him the opportunity to share what he had learned about feeding a family for less money. He became a sought after guest on local and regional radio and television stations. Once again he achieved success.

Then came devastating news. Charles Mattocks had type 2 diabetes. Reading all he could about the disease made him all too aware of how little he actually had known about diabetes. He was determined to save his life and knew he had to help others do the same. "The Diabetic You" documentary, website, and movement came out of that determination to educate and inspire people around the world. He is doing just that. From appearances on CNN, "The Today Show," "Anderson Cooper," "Good Morning America" and scores of other TV shows and radio programs across the country, to interviews in Huffington Post, Diabetes Health, Forecast Diabetes, his regular blog on the Dr. Oz website, and more, the world is learning about Charles Mattocks' war against diabetes. He developed a diabetic-friendly, gluten free treat called the "Charles Bar" that is in national distribution. Charles has also teamed up with Shire and is on a national RV testing tour he created that is going across the country to educate people about diabetes foot complications.

He is committed to providing free health testing for people from Orlando to Atlanta and beyond. His RV Testing Tour will appear at fairs, sporting events, malls and other venues. During a recent humanitarian trip to India, Mattocks helped test thousands for diabetes. In September he was a featured speaker at a prestigious TEDx conference in San Francisco. A blue ribbon champion for the International Diabetes Federation and spokesperson for the American Diabetes Association, Chef Charles has just written their next cookbook. A tireless advocate for diabetics everywhere, Charles Mattocks is determined to help stem the time of this deadly disease. Charles is also wrapping up his diabetes documentary entitled "The Diabetic You" and has just shot and is selling the first diabetes reality TV show entitled "Reversed." The best is yet to come as Charles is traveling the world and creating programs in other islands and countries. A voice and a force for serious change, Charles will shake up the health industry.