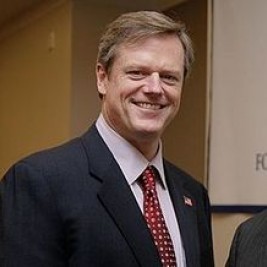 If your goal is to hire Charles D. Baker to be your next keynote speaker or to be the next brand ambassador our celebrity speakers bureau can assist. If Charles D. Baker’s booking fee is outside your companies budget or your unable to align with his appearance availability, our booking agents can provide you a list of talent that aligns with your event theme, budget and event date.

Raised in Needham, Massachusetts, Baker is the son of a Republican executive official who worked under Ronald Reagan and Richard Nixon. He graduated from Harvard College and obtained an MBA from Northwestern University's Kellogg School of Management. In 1991, he became Massachusetts Undersecretary of Health and Human Services under Governor William Weld. In 1992, he was appointed Secretary of Health and Human Services of Massachusetts. He later served as Secretary of Administration and Finance under Weld and his successor Paul Cellucci.

After working in government for eight years, Baker left to become CEO of Harvard Vanguard Medical Associates and later Harvard Pilgrim Health Care, a non-profit health benefits company. During this time he served three years as a selectman of Swampscott, Massachusetts, and considered a run for governor in 2006. He stepped down in July 2009 to run for Governor of Massachusetts on a platform of fiscal conservatism and social liberalism. He was unopposed in the Republican primary but lost in the general election to Democratic incumbent Deval Patrick. Running for governor again, on November 4, 2014, he won the general election against Democrat Martha Coakley.