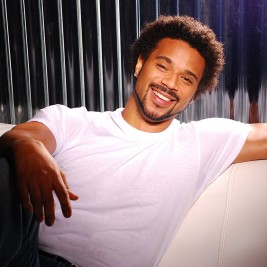 If your goal is to hire Cedric Pendleton to be your next keynote speaker or to be the next brand ambassador our celebrity speakers bureau can assist. If Cedric Pendleton’s booking fee is outside your companies budget or your unable to align with his appearance availability, our booking agents can provide you a list of talent that aligns with your event theme, budget and event date.

Intense. Charismatic. Charming. Sexy. Bad Boy? Maybe, but then there's always a maybe about a bad boy, isn't there? Cedric Pendleton knew from early on that he was destined for one of two things: the pulpit or the stage. He chose the stage or, as he would say, the stage chose him. Born in the small town of Florence, Alabama, his parents were school teachers, his father, was also a politician and civil rights leader. Cedric moved as a very young man to the big southern city of Atlanta where he quickly and surely made a name for himself as a respected, sought-after actor.

How did he do it? He did the work. While working full time in corporate sales, he emerged himself in a concentrated, back-breaking internship at Actor's Express Theater under then Artistic Director Chris Coleman, the result of which was a stunning debut performance in Stand Up Tragedy in which he played the lead. He has since worked on stage with such respected actors and directors as Gary Yates, David Bell, Ella Joyce, Ruby Dee, Angela Gibbs, Joan Pringle, and Woody King, Jr.

Committed and passionate from the very beginning, Cedric kept reaching and working. He added commercials, voice over work and industrials to his resume. And he made the most of Atlanta's burgeoning independent film community, in which his talent, perseverance, and charm served him well and put him on the local A-list.

As he consistently honed his talents and skills, his independent film work soon led to roles in hit features such as Runaway Jury, Summer Catch, Diary of a Mad Black Woman, and Madea's Family Reunion, allowing him to work with the likes of Brian Dennehy, Freddie Prinze, Jr., Debbie Allen, and Tyler Perry.

All the while, he was paving his way to Oz. Once he took the plunge and moved West, he proved that he was not just a big fish in a small pond, but rather, he could hold his own with the big dogs. Cedric landed supporting and recurring roles in hit television shows and movies like The Fantasia Barino Story, The Shield, The Guardian, One Tree Hill, Strong Medicine, and NYPD Blue.

For Cedric, like any true artist, there is no separation between his life and his craft. He commands attention like a star, and he thrives on it like a star. Unexpectedly, he accepts praise with grace. A multi-faceted treasure, he is also a producer, promoter, writer, poet, lyricist, and motivational speaker and a gifted athlete, martial artist, teacher, and mentor.