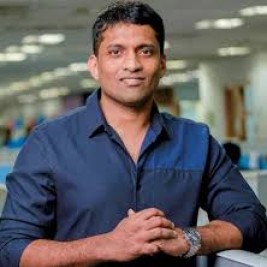 If your goal is to hire Byju Raveendran to be your next keynote speaker or to be the next brand ambassador our celebrity speakers bureau can assist. If Byju Raveendran’s booking fee is outside your companies budget or your unable to align with his appearance availability, our booking agents can provide you a list of talent that aligns with your event theme, budget and event date.

Raveendran is the founder of Byju’s Classes, the Education Technology firm whose tagline is “Fall in love with learning”. The test prep business he founded in 2007, helping CAT aspirants crack the exam by understanding the concepts behind the questions, is now a giant in the Indian education technology space, teaching predominantly maths and science concepts to kids from classes 6-12 along with test prep for several entrance exams. There are an estimated 227 million students in India, and education is traditionally a priority for Indians, so it is no wonder that the Indian EdTech market is estimated to be worth $40 million by 2017. Byju’s recently raised $75 million in funding from venture capitalists Sequoia Capital and Sofina, the largest funding round in the (admittedly short) history of EdTech in India, and the man at its helm is clearly the driving force that has made it all happen.