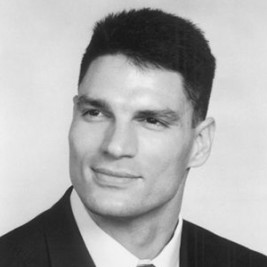 If your goal is to hire Bryan Mark Rigg to be your next keynote speaker or to be the next brand ambassador our celebrity speakers bureau can assist. If Bryan Mark Rigg’s booking fee is outside your companies budget or your unable to align with his appearance availability, our booking agents can provide you a list of talent that aligns with your event theme, budget and event date.

BRYAN MARK RIGG received his B.A. with honors in history from Yale University in 1996. Yale awarded him the Henry Fellowship for graduate study at Cambridge University, where he received his M.A. in 1997 and Ph.D. in 2002. Currently Professor of History at American Military University, he has served as a volunteer in the Israeli Army and as an officer in the U.S. Marine Corps. His research for this book has been featured in the New York Times, Los Angeles Times, and London Daily Telegraph. The thousands of pages of documents and oral testimonies the author collected for this study have been purchased by the National Military Archive of Germany. The Bryan Mark Rigg Collection is housed in the Bundesarchiv-Militärarchiv in Freiburg,Germany. What sparked Bryan's interest in this subject? Raised as a Protestant in the Texas Bible Belt, Bryan Mark Rigg was surprised to learn of his own Jewish ancestry while researching his family tree in Germany. This revelation, as well as a chance encounter with a Jewish veteran of the Wehrmacht at a Berlin screening of Europa Europa, roused him to embark on a decade of research while a student first at Yale University and later at Cambridge University. Hitler's Jewish Soldiers: The Untold Story of Nazi Racial Laws and Men of Jewish Descent in the German Military is the result of his efforts.

How did he conduct his research? Crisscrossing Germany by bicycle, and carrying his own supplies including backpack, video-camera, tripod, laptop, books, and documents--Bryan located and interviewed more than four hundred Mischlinge (partial Jews as labeled under Hitler's racial laws) and their relatives and friends. His quest also took him to Sweden, Canada, Israel, and Turkey. In addition, he scrupulously labored to provide documentary evidence to support the findings from each oral history. His interviewees have included former chancellor of Germany Helmut Schmidt, Adenauer's Secretary of State Hans von Herwarth, Bundesgeschäftsführer of the Social Democratic Party of Germany Egon Bahr, Field Marshal Erich von Manstein's adjutant Alexander Stahlberg, and Colonel Claus Schenk Graf van Stauffenberg's adjutant Horst von Oppenfeld.

How did his subjects react to his interest in them? Although earning trust was often challenging and some men refused to speak with Bryan, he also encountered many who were grateful for the opportunity at last to discuss this part of their lives in war. In some cases the men's families knew little or nothing of their hidden religious heritage.

In a 1996 London Telegraph article concerning his research efforts, Bryan described these men who are at the heart of his work: "They don't know where they stand. There is no place for them to tell their story. No one thought it was an issue, and neither side wants to claim them."

What is the Bryan Mark Rigg Collection? An unprecedented and invaluable result of Bryan's efforts to record the stories of these men has been his success in gathering over 30,000 pages of records, more than 500 hours of videotaped interviews, and 3,000 photographs that document the military experiences of the mischlinge and Jews that he met. In 1997, the Federal German Military Archives purchased what is now called the Bryan Mark Rigg Collection, and these materials are now housed in the Bundesarchiv in Freiburg.

What are some of his other experiences and interests? In addition to hi extensive research travel, Bryan has also engaged in humanitarian work in Romania, Bulgaria, the Bahamas, South Africa, and France. His efforts included developing a church network, caring for and educating children and adults, building a church and a baptistery, and even working as a mime. He has served in a Volunteer Unit in the Israeli Army, and as an officer in the U.S. Marine Corps. He presently lives in Texas with his wife and daughter and is Professor of History at American Military University.