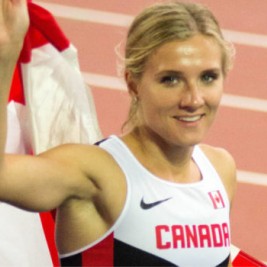 If your goal is to hire Brianne Theisen-Eaton to be your next keynote speaker or to be the next brand ambassador our celebrity speakers bureau can assist. If Brianne Theisen-Eaton’s booking fee is outside your companies budget or your unable to align with his appearance availability, our booking agents can provide you a list of talent that aligns with your event theme, budget and event date.

Brianne Theisen-Eaton is a Canadian track and field athlete who competes in the heptathlon and women's pentathlon. She is an Olympian from London 2012 and holds the Canadian record for the indoor pentathlon with a score of 4768 points. Theisen-Eaton is a heptathlon silver medallist from the 2013 World Championships, and a pentathlon silver medallist from the 2014 World Indoor Championships. She is the first and only Canadian woman to podium in the multi-events at the World Championships.

A national junior champion in 2006, she took the heptathlon gold medal at the Pan American Junior Championships the following year. She enrolled at the University of Oregon and broke a number of school records in her first three years, winning back-to-back NCAA heptathlon titles in 2009 and 2010. She has also won twice at the NCAA Indoor Championship, including a collegiate pentathlon record in 2011.