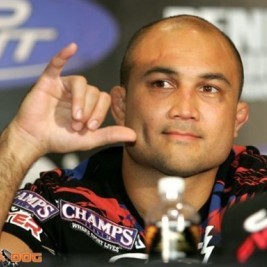 Businesses, Non-profit organizations, event planners and companies across the country have worked closely with our booking agents to hire B.J. Penn for a speaking engagements, guest appearances, product endorsements and corporate events. Many of those same clients have continued to turn to our speakers bureau as we can easily align B.J. Penn’s availability with their upcoming seminar, gala, annual conference, corporate function, and grand opening. Our close relationship with B.J. Penn’s booking agent and management team further enables us to provide inquiring clients with B.J. Penn’s speaking fee and appearance cost.

If your goal is to hire B.J. Penn to be your next keynote speaker or to be the next brand ambassador our celebrity speakers bureau can assist. If B.J. Penn’s booking fee is outside your companies budget or your unable to align with his appearance availability, our booking agents can provide you a list of talent that aligns with your event theme, budget and event date.

B.J. Penn is a retired American professional mixed martial artist and Brazilian Jiu-Jitsu practitioner. Penn debuted and competed in the Ultimate Fighting Championship, and later in K-1. Prior to fighting for the UFC, he became the first American Gold medalist of the World Jiu-Jitsu Championship. In mixed martial arts, Penn has competed in the Featherweight, Lightweight, Welterweight, Middleweight, and Heavyweight divisions. As a former UFC Lightweight Champion and UFC Welterweight Champion, he is only the second fighter in UFC history to win titles in multiple weight classes. Penn was also a Co-Champion in the UFC 41 Lightweight Tournament, due to an eventual draw opposite Caol Uno in the tournament finale. Through his tenures as champion, Penn unified the UFC Lightweight Championship (against Sean Sherk) to become the division's first Undisputed Champion; as well as broke the all-time lightweight title defense record. Penn was inducted into the UFC Hall of Fame in July 2015.

UFC President, Dana White credits Penn as the man who brought the lower weight divisions into the mainstream of mixed martial arts; claiming Penn to be "the first crossover pay-per-view star for the Ultimate Fighting Championship's lighter weight divisions", as well as that "[through his] accomplishments, B.J. Penn built the 155-pound division". Credited as the greatest Lightweight combatant in mixed martial arts history, Penn's domination of the division, as well as his performances in higher weight classes have him regarded as one of the greatest fighters in the history of the sport.