Search Bill Yoast
The Real-Life Hero of Remember the Titans 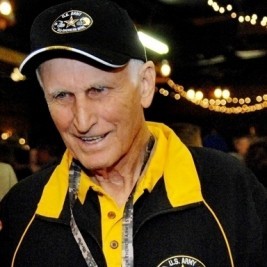 Businesses, Non-profit organizations, event planners and companies across the country have worked closely with our booking agents to hire Bill Yoast for a speaking engagements, guest appearances, product endorsements and corporate events. Many of those same clients have continued to turn to our speakers bureau as we can easily align Bill Yoast’s availability with their upcoming seminar, gala, annual conference, corporate function, and grand opening. Our close relationship with Bill Yoast’s booking agent and management team further enables us to provide inquiring clients with Bill Yoast’s speaking fee and appearance cost.

If your goal is to hire Bill Yoast to be your next keynote speaker or to be the next brand ambassador our celebrity speakers bureau can assist. If Bill Yoast’s booking fee is outside your companies budget or your unable to align with his appearance availability, our booking agents can provide you a list of talent that aligns with your event theme, budget and event date.

Bill Yoast is the real-life hero of Remember the Titans, the inspirational hit movie, which chronicled the struggles of black and white football players and their coaches who were forced together when three high schools in Alexandria, VA, were combined into one school, T.C. Williams. Those who have seen the movie will remember that Will Patton played Yoast's role and Denzel Washington played the role of Herman Boone, who with Yoast led the team to an undefeated season and the Virginia state championship. More importantly, both men brought the school and the community together at a volatile time when race relations were horribly frayed.

When the schools were combined it was taken for granted that Yoast would be given the head coaching job; he was by far the most experienced and successful of the candidates. But for political reasons, the school board chose Boone, a relative newcomer to the Alexandria system. Yoast took the high road, accepting the job as Boone's assistant and modeling the values and discipline that helped bring players and coaches together to forge a unified team, a model of integration on and off the field. That model was so compelling that high school and college football coaches across the country brought their teams to see Yoast's story on film. The NFL's Miami Dolphins attended Remember the Titans the week before their season began.

The real life Bill Yoast is even more compelling than the film version. The former World War II Air Force Veteran, at one time, considered going into the ministry. Luckily for the hundreds of young men and women whose lives he helped mold, Yoast found his calling in coaching. His efforts were recently recognized by the National Consortium for Academics and Sports with the 2001 National Student-Athlete Day Award in the category of Coach.

To Bill Yoast, the title "Coach" has always meant more than wins and losses. Coaching has been a vehicle through which he can help young people, both the physically fit and the physically challenged, reach their potential and contribute to society. Perhaps Yoast's greatest victory came with Gerry Bertier, his star lineman whose tragic auto accident and resulting paralysis was chronicled in Remember the Titans. What the film did not include was the fact that for years after the accident, Yoast continued to be Gerry's coach, getting him involved in the wheel chair games. Yoast's goal was to help Gerry stop focusing on what he could not do, and concentrate on what he could do. Once Gerry did that, he became the competitive person he was on the football field and, with Yoast as his coach, went on to win gold medals in the Wheel Chair Olympics in shot put and discus.

Audiences around the country, from seventy-year-old retirees to fifteen-year-old kids, athletes and non-athletes alike, have found Yoast's speeches transfixing and inspirational. His charismatic presence, combined with his honesty, southern charm, wit and mellifluous voice delight his listeners and keep them around long after he is finished, seeking autographs and a chance to meet him up close. At a time when teamwork, tolerance, discipline and a sense of unity have been moved to center stage in America, Yoast is the perfect speaker for any occasion.