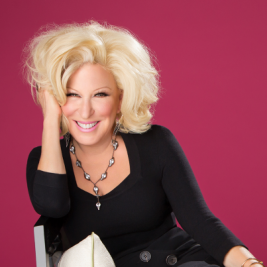 Businesses, Non-profit organizations, event planners and companies across the country have worked closely with our booking agents to hire Bette Midler for a speaking engagements, guest appearances, product endorsements and corporate events. Many of those same clients have continued to turn to our speakers bureau as we can easily align Bette Midler’s availability with their upcoming seminar, gala, annual conference, corporate function, and grand opening. Our close relationship with Bette Midler’s booking agent and management team further enables us to provide inquiring clients with Bette Midler’s speaking fee and appearance cost.

If your goal is to hire Bette Midler to be your next keynote speaker or to be the next brand ambassador our celebrity speakers bureau can assist. If Bette Midler’s booking fee is outside your companies budget or your unable to align with his appearance availability, our booking agents can provide you a list of talent that aligns with your event theme, budget and event date.

Bette Midler began her career as an extra in Hawaii, which prompted a move from her Honolulu hometown to New York in 1965. Within months, she debuted on stage in Miss Nefertiti Regrets, and went on to take over the role of Tzeitel in the hit Broadway musical Fiddler on the Roof.

Following singing engagements at New York cabarets, Midler opened a record-breaking run at the Continental Baths, which led to a recording contract, and in 1973 she won a Grammy for her platinum-selling debut album, The Divine Miss M. She later earned additional Grammys for the title song from The Rose, Blueberry Pie and the Beaches soundtrack album, featuring Wind Beneath My Wings. Many of her albums have achieved platinum status, and her concerts and stage shows opened to sold-out houses. Her appearance at Broadway's Palace Theatre earned a Tony Award and her 1993 tour Experience the Divine broke all box office records for a concert by an individual.

Among Midler's feature credits are 1979's The Rose, which earned her an Oscar nomination and two Golden Globe Awards, followed by the film adaptation of her Broadway show Divine Madness, and starring roles in Jinxed, Down and Out in Beverly Hills, Ruthless People, Outrageous Fortune, Big Business, Beaches, Stella, Scenes From a Mall and For the Boys, for which she won a Golden Globe Award and an Oscar nomination for Best Actress. She also starred in Hocus Pocus, Get Shorty, The First Wives Club, That Old Feeling and Isn't She Great, and hosted Disney's Fantasia 2000.

On television, Midler recently won a People's Choice and a TV Guide Award for her debut series role in the comedy Bette. She headlined the HBO specials The Fabulous Bette Midler Show and De Tour, the Emmy Award-winning CBS special Ol Red Hair is Back and HBO's concert film Diva Las Vegas, which brought an Emmy Award for her performance and received a record 10 nominations for the year. She won an Emmy for her moving appearance on Johnny Carson's final Tonight Show episode, as well as a Golden Globe and a National Board of Review award for her performance in the 1992 television adaptation of the musical Gypsy.

Bette Midler is the Founder, and very active guiding light, of the New York Restoration Project, which she established in 1997. The organization works to uncover, reclaim and clean neglected public spaces, in part through partnerships with government but fundamentally by nurturing community empowerment and fostering civic pride in local communities. The NYRP brings these spaces back to life, gives them back to the public and secures the resources to make all that happen.

Bette Midler is married to Martin Von Haselberg and has a daughter, Sophie.