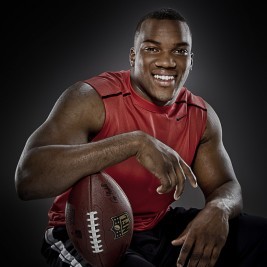 Businesses, Non-profit organizations, event planners and companies across the country have worked closely with our booking agents to hire Beanie Wells for a speaking engagements, guest appearances, product endorsements and corporate events. Many of those same clients have continued to turn to our speakers bureau as we can easily align Beanie Wells’s availability with their upcoming seminar, gala, annual conference, corporate function, and grand opening. Our close relationship with Beanie Wells’s booking agent and management team further enables us to provide inquiring clients with Beanie Wells’s speaking fee and appearance cost.

If your goal is to hire Beanie Wells to be your next keynote speaker or to be the next brand ambassador our celebrity speakers bureau can assist. If Beanie Wells’s booking fee is outside your companies budget or your unable to align with his appearance availability, our booking agents can provide you a list of talent that aligns with your event theme, budget and event date.

Beanie Wells was born August 7, 1988 and is a former NFL running back. He was selected in the first round (31st overall pick) of the 2009 NFL Draft out of The Ohio State University.

Wells was drafted in the first round (31st overall) by the Arizona Cardinals in the 2009 NFL Draft. He competed for the starting running back job with Tim Hightower.

On August 1, 2009, Wells was signed to a five-year contract. Later that day, he was carted off from practice with an ankle injury.

On August 28, 2009, Wells made his professional debut with the Cardinals in a preseason game against the Green Bay Packers. He ended the night with seven carries for a total of 46 yards and two touchdowns, including a 20-yard score in the second quarter.

On October 25, 2009, in the second quarter against the New York Giants, Wells ran 13 yards for his first NFL touchdown. In that game against, Wells rushed for 67 yards on 14 attempts.

On January 16, 2010, Wells scored his first postseason touchdown, a four-yard rush against the New Orleans Saints. He ended the season with 793 yards rushing, second-best among rookies after Knowshon Moreno. He also caught 12 passes for an 11.9 yard average.

For the 2011 NFL season, the Arizona Cardinals and coach Ken Whisenhunt are placing a heavy emphasis on the ground-attack led by Wells. The decision was mostly influenced by the departure of Tim Hightower to the Washington Redskins, in turn giving the starting back role to Wells.

On November 27, 2011, Wells set a Cardinals single-game and personal record by rushing for 228 yards against the St. Louis Rams. Wells' performance eclipsed the team record previously held by LeShon Johnson, who rushed for 214 yards against the New Orleans Saints in 1996.