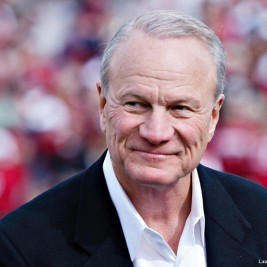 Businesses, Non-profit organizations, event planners and companies across the country have worked closely with our booking agents to hire Barry Switzer for a speaking engagements, guest appearances, product endorsements and corporate events. Many of those same clients have continued to turn to our speakers bureau as we can easily align Barry Switzer’s availability with their upcoming seminar, gala, annual conference, corporate function, and grand opening. Our close relationship with Barry Switzer’s booking agent and management team further enables us to provide inquiring clients with Barry Switzer’s speaking fee and appearance cost.

If your goal is to hire Barry Switzer to be your next keynote speaker or to be the next brand ambassador our celebrity speakers bureau can assist. If Barry Switzer’s booking fee is outside your companies budget or your unable to align with his appearance availability, our booking agents can provide you a list of talent that aligns with your event theme, budget and event date.

Barry Switzer has one of the highest winning percentages of any college football coach in history, and is one of only two head coaches to win both a college football national championship and a Super Bowl (the other is Jimmy Johnson).

Switzer earned a scholarship to the University of Arkansas. He played center and linebacker for four years for coach Frank Broyles and was a graduate assistant with the 1964 National Championship team (whose players included Jimmy Johnson, Jerry Jones and Ken Hatfield). Switzer did a brief stint in the U.S. Army and then returned to Arkansas as a coach.

Switzer spent two years at his alma mater, coaching among others, future rival Jimmy Johnson and Dallas Cowboys owner Jerry Jones. In 1966, he moved to the University of Oklahoma as an assistant coach and spent nine seasons in that capacity. By 1971, he was the team's offensive coordinator as the team set NCAA team rushing records that still stand today.

Switzer became head coach at Oklahoma in 1973, leading the team to undefeated seasons that year (10-0-1) and the next, when the Sooners went 11-0 and shared the national championship with USC. They were outright national champions in 1975, winning 11 games against just one defeat.

His teams won or shared the Big Eight Conference title every year between 1973 and 1980.

Oklahoma won another conference title in 1984, when the Sooners again played for the national championship and lost. They won it the next year, going 11-1 and upsetting top-ranked Penn State in the Orange Bowl. The next two years, they posted the same record but finished ranked third in the final polls both seasons.

Switzer resigned from his coaching position at Oklahoma early in 1989, with a career record of 157-29-4.

Switzer was elected to the College Football Hall of Fame in 2002. In 2004, he received the Jim Thorpe Lifetime Achievement Award.