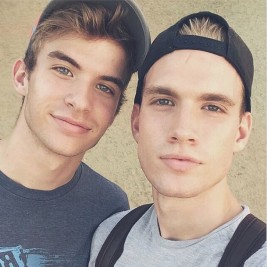 Book Austin and Aaron Rhodes for a Speaking Engagement

If your goal is to hire Austin and Aaron Rhodes to be your next keynote speaker or to be the next brand ambassador our celebrity speakers bureau can assist. If Austin and Aaron Rhodes’s booking fee is outside your companies budget or your unable to align with his appearance availability, our booking agents can provide you a list of talent that aligns with your event theme, budget and event date.

Austin and Aaron Rhodes are fraternal twin brothers who became YouTube personalities after uploading a viral video in which they revealed to their father that they are both gay.

Both Aaron and Austin are signed to Wilhelmina LA and guest-starred as Roger and Dodger on Season One of Scream Queens.

Aaron and Austin attended Ashland High School while growing up in Ashland, Ohio. While in Ohio, they both worked as sales associates at Hollister Co. After graduating high school, Aaron attended Ohio State University for a short time before deciding to leave and make the big move to Los Angeles in 2014 with Austin. Austin is studying at Georgetown University.

In early 2015, they uploaded an emotional video called "Twins Come Out To Dad". In the video, the twins tell the camera that most people know they’re gay but that there is one more person they need to tell: their dad. The twins are incredibly nervous while the phone rings and they make small talk with their dad. When they finally tell him, their dad’s response is “I love you both. You’re living your lives, and that’s all you can do in life is live it.” The video later went viral, gaining more than 19 million views as of July 2015 and earning the boys, along with their father, an interview on the Ellen DeGeneres Show.

On February 16, 2015, they announced via a YouTube video that they were both joining the upcoming horror-comedy TV anthology series Scream Queens after having some meetings with one of the creators, Ryan Murphy.Source That same month, Austin and Aaron signed with Wilhelmina Models in Los Angeles.

NOPACTalent acts as a Celebrity Speakers Bureau and Athlete Booking agency for corporate functions, appearances, private events and speaking engagements. NOPACTalent does not claim or represent itself as Austin and Aaron Rhodes’s speakers bureau, agent, manager or management company for Austin and Aaron Rhodes or any celebrity on this website. NOPACTalent represents organizations seeking to hire motivational speakers, athletes, celebrities and entertainers for private corporate events, celebrity endorsements, personal appearances, and speaking engagements.