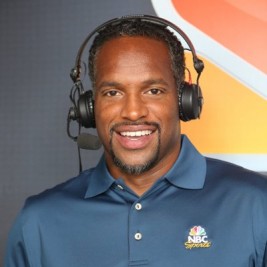 Businesses, Non-profit organizations, event planners and companies across the country have worked closely with our booking agents to hire Ato Boldon for a speaking engagements, guest appearances, product endorsements and corporate events. Many of those same clients have continued to turn to our speakers bureau as we can easily align Ato Boldon’s availability with their upcoming seminar, gala, annual conference, corporate function, and grand opening. Our close relationship with Ato Boldon’s booking agent and management team further enables us to provide inquiring clients with Ato Boldon’s speaking fee and appearance cost.

If your goal is to hire Ato Boldon to be your next keynote speaker or to be the next brand ambassador our celebrity speakers bureau can assist. If Ato Boldon’s booking fee is outside your companies budget or your unable to align with his appearance availability, our booking agents can provide you a list of talent that aligns with your event theme, budget and event date.

Ato Boldon is a former athlete from Trinidad and Tobago and four-time Olympic medal winner. Only three other men in history—Usain Bolt, Frankie Fredericks and Carl Lewis—have won as many Olympic individual event sprint medals. He is the current Trinidad and Tobago national record holder in the 50, 60 and 200 metres events with times of 5.64, 6.49 and 19.77 seconds respectively. He also held the 100m national record at 9.86, having run it four times, until Richard Thompson ran 9.85 on 13 August 2011. He also holds the Commonwealth Games record in the 100 m.

After retiring from his track career, he was an Opposition Senator in the Trinidad and Tobago Parliament, representing the United National Congress from 2006–2007. He is now a ESPN and NBC Sports television broadcast analyst for track and field, while also serving as a features contributor for NASCAR on NBC.