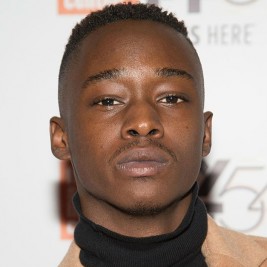 Businesses, Non-profit organizations, event planners and companies across the country have worked closely with our booking agents to hire Ashton Sanders for a speaking engagements, guest appearances, product endorsements and corporate events. Many of those same clients have continued to turn to our speakers bureau as we can easily align Ashton Sanders’s availability with their upcoming seminar, gala, annual conference, corporate function, and grand opening. Our close relationship with Ashton Sanders’s booking agent and management team further enables us to provide inquiring clients with Ashton Sanders’s speaking fee and appearance cost.

If your goal is to hire Ashton Sanders to be your next keynote speaker or to be the next brand ambassador our celebrity speakers bureau can assist. If Ashton Sanders’s booking fee is outside your companies budget or your unable to align with his appearance availability, our booking agents can provide you a list of talent that aligns with your event theme, budget and event date.

Ashton Sanders is an American actor. He is best known for his performance in the Academy Award-winning film Moonlight (2016).

Sanders made his film debut in The Retrieval, directed by Chris Eska. The film had its world premiere at South by Southwest on March 11, 2013. It was released in a limited release on April 2, 2014 by Variance Films.

In 2015, Sanders had a small role in Straight Outta Compton. In 2016, he appeared in an episode of Refinery29's web series The Skinny.

The same year, Sanders appeared in the drama film Moonlight, directed by Barry Jenkins. The film had its world premiere at the Telluride Film Festival on September 2, 2016, and began a limited release on October 21, 2016 by A24. Moonlight received massive critical acclaim as well dozens of accolades, including the Golden Globe Award for Best Picture – Drama. The film also won three Academy Awards for Best Picture, Best Adapted Screenplay, and Best Supporting Actor for Mahershala Ali. Sanders' role in the film was praised by critics; Benjamin Lee of The Guardian called his performance "powerful".

Sanders was studying towards a BFA at The Theatre School at DePaul University, before dropping out in 2016 to focus on his acting career.