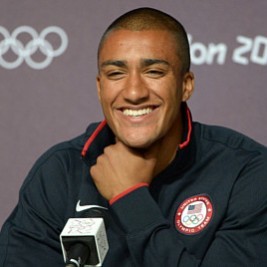 Businesses, Non-profit organizations, event planners and companies across the country have worked closely with our booking agents to hire Ashton Eaton for a speaking engagements, guest appearances, product endorsements and corporate events. Many of those same clients have continued to turn to our speakers bureau as we can easily align Ashton Eaton’s availability with their upcoming seminar, gala, annual conference, corporate function, and grand opening. Our close relationship with Ashton Eaton’s booking agent and management team further enables us to provide inquiring clients with Ashton Eaton’s speaking fee and appearance cost.

If your goal is to hire Ashton Eaton to be your next keynote speaker or to be the next brand ambassador our celebrity speakers bureau can assist. If Ashton Eaton’s booking fee is outside your companies budget or your unable to align with his appearance availability, our booking agents can provide you a list of talent that aligns with your event theme, budget and event date.

Ashton Eaton was born January 21, 1988 and is an American decathlete, who holds the world record in both the decathlon and heptathlon events, and is only the second decathlete (after Roman Šebrle) to break the 9,000-point barrier, with 9,039 points.

He competes for the Oregon Track Club Elite team based in Eugene, Oregon. In college, Eaton competed for the University of Oregon, where he was a five-time NCAA champion, and won The Bowerman award in 2010. He won a silver medal at the 2011 World Championships. He won the gold medal while representing the United States in the decathlon at the 2012 Summer Olympics in London.

At the 2012 Olympics, Eaton's primary rival was (now) teammate Trey Hardee. Eaton's 10.35 100 metres was the top time of the day, with Hardee the next best. His 8.03 long jump was almost half a metre further than any other competitor, building him a sizeable lead. His 14.66 shot put was just 12 cm short of his personal record. And his 2.05 high jump tied with several members of the field for second best. In the final first day event his 46.90 400 metres was over a full second faster than anybody else in the field. His first day total was 4661, with a 220 point lead over Hardee.

Day two started with a virtual tie between Hardee and Eaton, Eaton getting 13.56 in the 110m hurdles. Eaton's discus throw of 42.53 gave up almost 6 metres and 120 points to Hardee, but by that point Eaton still had a 100 point lead. Eaton more than gained that back with a 5.20 pole vault, the third best competition. And in the javelin throw Hardee pulled back 70 points with a good throw, an advantage limited by Eaton setting a new personal best 61.96 in the event. With Eaton holding a 150+ point lead and a superior personal record in the 1500 metres over Hardee, the medals were already determined. Nobody made a serious run at improving their position, Eaton just went through the formality of completing the event in 4:33.59 to take the gold medal.